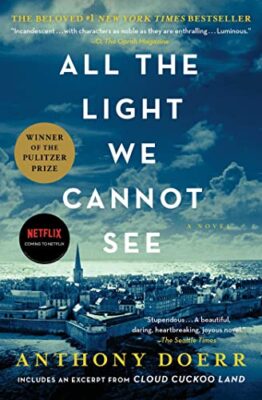 I kept seeing this book everywhere when it came out/ won the Pulitzer in 2015. It has taken me a good number of years to get around to it, but I’m so glad I did. I picked this one up in November, which is Remembrance Day/ Veterans Day month, so a WWII book seemed fitting.

Doerr’s story follows two adolescents living in challenging times on opposite sides of WWII: Marie-Laure, a blind girl living in Paris with her father, and Werner, an boy living in a children’s home in Germany’s industrial Saar region.  For the majority of the novel, the two characters’ lives proceed in parallel, eventually intersecting.

The novel unfolds roughly chronologically, beginning with both characters’ early lives- Marie-Laure’s cozy and confined world in pre-war Paris and Werner’s poor but relatively happy life with his younger sister, their French orphanage ‘mother’ and the other children in the orphan home. Marie-Laure’s father is a locksmith for a Paris museum, and when she goes blind at age 5 he makes her the centre of his world- he carves her a scale model of their neighbourhood, teaches her to read braille and lets the natural history department of the museum where he works become her playground. A thread throughout the story concerns the “Sea of Fire”, a much storied and possibly cursed diamond that the museum keeps in its vault- the rumour is that the possessor of the diamond cannot die, but those he loves will face tragedy. Just across the border, Werner and his sister let their curiosity run wild, scavenging parts to create their own radio and letting their minds fill with the information streamed over the airwaves from a French science broadcast. Looming over their childhood is the future that is presumed to wait for all young men- life and an early death in the region’s mines. As these two leads grow older, war grows closer until there is no avoiding it.

Doerr treats his main characters with compassion, and that theme underlies the title for the novel- the light inside of us, the beauty and good in a world dark with conflict. Although Doerr doesn’t use magic realism, there is a non-real, fairy-tale like feel to this story- the blind girl and her miniatures, the magical diamond, the orphan boy building radios. The language was lovely too- Doerr allegedly spent 11 years writing this, and you can tell in the images he creates (I’m still thinking about a landmine that erupts in a ‘fountain of earth’). Well worth reading.