I remember the moment when I realized that white women, as a whole, are not crusaders for social justice, but enforcers of white supremacy. I had been working towards it for a while. It happened a lot later than I’d like to admit, and the realization took a while to sink in. I’d like to say I’ve given up my illusions about the role of the white woman in the world, but the things we absorb subconsciously as children are the hardest to root out. My eyes started opening in 2008 when Tina Fey and Amy Poehler co-anchored Saturday Night Live’s Weekend Update and tried to persuade Democrats in Texas and Ohio to nominate Hillary Clinton instead of Barak Obama because, yes, she is a bitch and that’s a good thing. 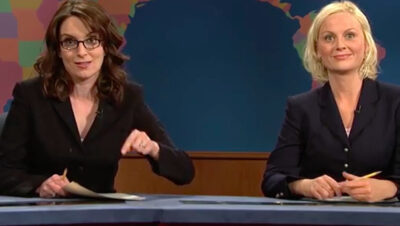 TINA FEY: Maybe what bothers me the most is that people say that Hillary is a bitch. Let me say something about that: Yeah, she is. So am I and so is this one. [Points to Amy Poehler]

AMY POEHLER: Yeah, deal with it.

TINA FEY: You know what, bitches get stuff done. That’s why Catholic schools use nuns as teachers and not priests. Those nuns are mean old clams and they sleep on cots and they’re allowed to hit you. And at the end of the school year you hated those bitches but you knew the capital of Vermont. So, I’m saying it’s not too late Texas and Ohio, bitch is the new black!

“Bitches get stuff done” and “bitch is the new black” were everywhere. I happily chirruped the first, but the second one bothered me. It very clearly pitted (white) women against Black people and that’s way too…accurate. I don’t think I ever said it, but I also didn’t know how to explain why it felt ugly to me. Yes, a white woman and a Black man were competing for the nomination, but “bitch is the new black” wasn’t about Clinton versus Obama. It was about us versus them and even then I could see the only winner in that fight was white men.

I’ve spent the last few years learning and unlearning so that I can move from a surface level “racism is bad” to an active anti-racism. Jessie Daniels’ Nice White Ladies is a piece I needed. It explains me and the world I have moved in to me. Daniels is a few years older than I am, and we had fairly different upbringings, but like me, she is from Texas and we had similar American history as presented by the State of Texas educations. Reading Nice White Ladies felt like talking to an old friend who is much smarter than I am, who kindly lays out their arguments brick by brick. I always knew where she was going, but she helped me walk with more confidence. It is a must read if you are white and want to evolve past white feminism in a meaningful way.

Nice White Ladies is deeply personal. Daniels uses examples from her own life and her family to illustrate how white womanhood is entrenched in white supremacy, how we are rewarded and incentivized to maintain it, and how it is killing us.

I will be recommending this to almost everyone I know. I’m pretty sure some of my friends are going to find it uncomfortable, while others will feel the relief that I felt in seeing our half understood discomforts explained so clearly.

I received this as an advance reader copy from NetGalley. My opinions are my own.