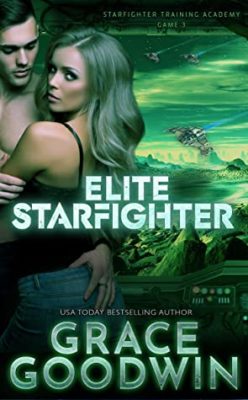 CBR13Bingo: Machinery Because Lily smashes stuff in a mecha! Like starbases! And enemy fighters! And freaking spaceships!

Look, I know these books are ridiculous, but that’s the joy of them. Plus, I was really looking forward to seeing Lily smash some stuff up with her mecha suit! This is the third book in the series and follows directly after the other two, so it shouldn’t be read as a standalone.

With her best friends Jamie and Mia gone, Lily’s ready for her alien partner to show up and take her back to Velerion after she beats the Starfighter Training Academy game. Darius, who’d been planning out how to explain everything to her, is completely taken aback, and even more so when the quiet woman seems to not want anything to do with him. Lily in real life is nothing like her wild and raucous personality from the game. But Darius has a lot of secrets he’s keeping from her, ones that make him even more overprotective than usual, threatening their mission and Lily’s standing with the rest of the team. With an invasion force nearing, can Lily and Darius figure out how to work together as true partners?

“In the game I was brilliant. Fearless. Aggressive. I kicked everyone’s ass, screamed at my enemies, and tore down walls with my bare hands. In the game, I was a monster.
And I had come to realize I enjoyed being that monster. I was tired of hiding all my emotions and acting as if everything was right with the world.”

Lily is basically a caricature of a British lady: reserved, unwilling to display her emotions, and thanks to her cold upbringing, convinced that she’s unloveable. That is, until she gets inside her Titan mech. There, she’s confident in her capabilities and, frankly, absolutely bloodthirsty. Figuring out how to retain that confidence outside the mech is basically Lily’s character arc for the book. Darius isn’t quite sure what to do with her two seeming disparate personalities. All he does know is that he has to protect her, like he was unable to protect his own brother. His insecurities lead to him being a huge jerk, basically, where he does things that he know will make her mad but brush it away as being for her own good. But hey, at least this hero has some sort of character development.

“Forget about the war,” Mia insisted. “Tell us about Darius.”

The plot is about what you’d expect. With her all her interplanetary missiles destroyed thanks to Mia’s actions in the last book, the evil baddie has decided to move forward with a direct invasion of Velerion. The Starfighters have a plan, but it’ll require the Titans to commit to a mission with a very low chance of survival – something that Darius won’t allow. The action scenes read better than the ones in the first book and were quite suspenseful, but that also may be my love of mecha talking. I mean, they’re literally digging through walls and bending metal beams – what’s not to love? The consent issues are a lot better in this book, though there are a few issues. Bondpartners earlier in the series have been romantic partners, though this book brings up the existence of “second tier” bonded partners like friends or siblings. I didn’t like the implication that a romantic relationship is the be-all, end-all.

“Grace Goodwin, you bitch. I am going to have words with you when I get home.” This author was a liar. There was no sexy alien hunk out here in space waiting to make all my dreams come true.

Hilariously enough, Lily decides to bring crates of books with her (girl, ever hear of a Kindle?) and some of them are romances by none other than Grace Goodwin herself. This results in some weird crossover mayhem where the hero reads them and then decides to re-enact scenes from those books. Did the author run out of ideas for over-the-top sex scenes and just wanted an excuse to reuse some? Is this some sort of weird cross-promotion? I don’t know, but I cackled like a loon.

Overall, this is another fun entry in the series. With the last of the friends on Velerion, I’m not sure if this series will continue, but if it does, I’ll definitely pick it up for quick and silly read!

I received an advance review copy of this book from Grey’s Promotions. This does not affect my opinion of the book or the content of my review.