> FAQ Home
> Genre: History > “They did what human beings looking for freedom, throughout history, have often done. They left.” 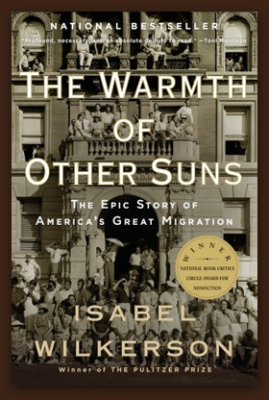 My boyfriend read The Warmth of Other Suns (2010) by Isabel Wilkerson and suggested that I read it. I trust his judgment, but it didn’t hurt that it was named the best book of the year by a ton of publications. It also just sounded interesting.

The Warmth of Other Suns is a non-fiction book about The Great Migration that occurred from 1915-1970. Coming into this novel, I was vaguely aware that a large number of Black Americans had moved up North after slavery ended, but that was about the limit of my knowledge. Wilkerson goes into much more detail about the numbers, the reasons, and the effects of this huge population shift on both the northern destination cities as well as the South and the people left behind.

Wilkerson interviewed thousands of people in writing this book. One of my favorite aspects of this book was that she followed the stories of three different people who moved out of the South. They moved at different times, arrived at different places, and came from various locations and social strata. But their personal stories humanized the enormous numbers involved in the migration. Wilkerson also included enough big picture information that you could understand the context of the individual stories.

Ida Mae Gladney was probably my favorite person in the book. She left Mississippi with her husband and two kids, pregnant with a third, in the fall of 1937. They were sharecroppers under a relatively fair (for the time) white farmer, but they decided to leave after Ida Mae was threatened and a cousin was badly beaten by some white men because they thought (wrongly) that he’d stolen some turkeys. They didn’t want to live under that violence and fear anymore. Ida Mae was a hard-working, sweet woman who cared deeply about her family. She met Barack Obama when he was a state senator and came and spoke to her Chicago neighborhood. I wish she had been alive to see him become President.

George Starling lived in Florida. He’d wanted to graduate from college, but his father wouldn’t pay for more than one year. George found himself picking fruit in the plentiful Florida groves. But he wasn’t satisfied with the bad working conditions and measly pay–especially during the war when workers were scarce and fruit prices were high. Starling and two of his friends helped to organize the pickers and request higher wages. Some days this worked, but it was dangerous to defy white people in Florida. Starling heard that men were planning on killing him, and he fled to New York City in 1945.

Robert Pershing Foster grew up in the tiny town of Monroe Alabama. His father was principal of the local school, and his mother was a teacher. His brother went on to become a doctor and Robert faced similar expectations for himself. Robert went on to marry the daughter of the President of Morehouse College, putting himself in the middle of Black high society in Atlanta. Robert felt a great need to live up to his father-in-law’s expectations. Robert also could not face the constant disregard and disdain he faced in the Jim Crow South. In 1953, Robert drove across the country to Los Angeles, California to start his medical practice. Eventually he became very successful, bringing his wife and daughters to come live with him and becoming very prosperous. Ray Charles was one of his patients. Robert definitely had his demons, though. He cared very much about image, controlling his wife and nephew down to what they should wear. And he was big into gambling. I would have liked to know more about what was going on inside his head.

Wilkerson presents the migrants almost as immigrants from another country–giving up almost everything for a chance at a better life. In some ways life was better up North. They didn’t have to “sir” and “ma’am” all the white people or step off the sidewalk. They also voted, and were encouraged to vote. However, there was still plenty of racism. Black people were forced to live in a very small area of the city. If they tried to live in a “white” neighborhood, they faced incredible opposition and violence. Thus, housing in Black neighborhoods was significantly more expensive and of lesser quality.

The Warmth of Other Suns is pretty long and goes into a lot of detail, both about the individual stories of Ida Mae, George, Robert, and other migrants, as well as conditions and circumstances of the time. It is impossible to even mention everything covered in this book or do justice to it in a book review. It is much better just to read it for yourself. Highly recommended.

You can find all my reviews on my blog.