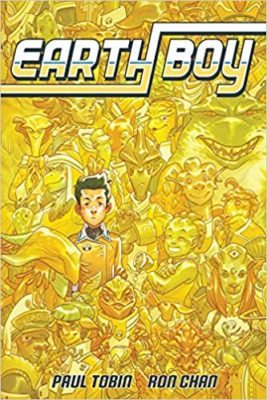 While I would have liked a little more action in this graphic novel with the name, Earth Boy, this was a fun book that has an overall story that is packed with just enough to keep me reading. In fact, I just might reread it at some point and that is something I rarely do. Now, granted, there are several plot point or story arc holes, but that did not take away from the fact it was just (as said above) a fun story. Paul Tobin created a book that I was able to sit and read during lunch. It was not icky (even though there is slime) and it was not violent (even though there are pirates) and it was not too serious, or even overly too slap-stick humor. And perhaps, the best part was that I had the opportunity to have this book in an eBook format (not NetGalley, I am such a tech spaz and cannot download there!). I never felt one could read a graphic novel in eBook format!

The illustrations of Ron Chan are strong, colorful, and detailed. The idea of a kid in “middle school/high school” trying to fit in story has been done before, even with aliens, but this is fresh due to the characters and the art of Chan. It is a simple story, but still has several layers and while as said, not gross, it has a piece of silly “potty humor,” too.

This new fantasy/science fiction graphic novel explores a human/Earthing going to space cadet school. This is a dream of Benson. He loves his family, the farm, and his dog, but there is so much more out there, waiting to be explored. His knowledge of space, the academy and alien creatures probably surpass any other person. But there are secrets, bullies, and pirates to deal with. There are acceptance issues, preconceived notions, and friendships to make.

On one level all ages can enjoy Earth Boy, but perhaps the best ages are 10 to 14. However, a strong 8/9-year-old could handle everything as well.  And while I want more of Benson and his friends, I also feel this is a solid story alone and this should be the only book.