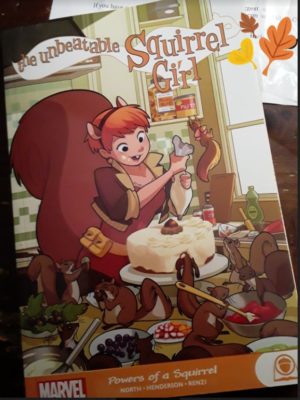 I am hoping to be able to get at least one more review in after this one, as I would not want to have my last review be a negative one. Of course, since there are only three more days… I am not holding my breath.

I was so VERY VERY VERY excited (if you have not guessed) about a superhero that was part squirrel/part girl. (I am easily distracted by shiny objects, squirrels, books in general and books that happen to have a shiny cover with a squirrel on it… true story actually). I was hoping that The Unbeatable Squirrel Girl: Powers of a Squirrel by Ryan North was going to be the COOLEST ever. Instead, I am not sure what I read. Every story (or individual comic, which was then collected into this collection) was Squirrel Girl (know for the rest of the review as SG) kicking butt and winning. What? Waiiit there a second, you say, that is what superheroes do! But the thing was, there are no real setbacks. She might have a bump or two, but you know she is going to win. There is no, “Oh! Maybe she won’t make it.” And her fight with Galticus was so dull I fell asleep. And (spoiler) she beats up The Avengers without even mussing up her hair?

And her friends, Koi Boi and Chipmunk Hunk? Do not get me started on how I am not digging those powers. After all, we have a girl who talks to squirrels. Do we need a guy who does chipmunks, too? (I will not tell if you do not if SG can talk to both). And Koi Boi can only talk to fish? In NYC that does not seem like a big deal. Now in the Caribbean…? However, Loki’s cameo was amusing and had a storyline that was Funny As Heck and something one could sink their teeth into.

There is no “all knowing narrator” and all your information comes from SG herself and because of that, and saying things “out of the blue” with little to no context, sometimes the text was hard to understand. There are at times that I really did not like SG. She does not always have common sense. She can be a bit selfish. I could get behind her being clumsy as she tries to balance Superhero and Doreen Green College Girl, but it never comes off as charming. And to add to the fact this was my first SG, I had no idea about her Thanos connection or her Deadpool connection. Or some other things that the author takes for granted the reader knows. And why is she in a chat format with only her roommate, her squirrel friend Tippy-Toes, the Hulk and Tony Stark? (And WHY are two Avengers in an old school chat forum in the first place?) And then there is the tiny fine print at the bottom of a few pages that sometimes adds to the story, but more likely is just color commentary that made the flow of the story off if you remembered to read it.

The one saving grace is that the illustrations are good. I enjoyed the tradition comic/graphic novel look, colors, and details. Erica Henderson is the main artist. There are others who add some pieces/details to the illustrations/story. These are usually done in a new style, therefore the different artist talents come out. Also, the alternative images and sketchbook at the end are also pluses.

Adult me is not digging this heroine. But perhaps your 10 to 14-year-old will.