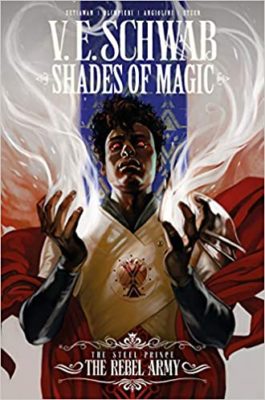 “The Steel Prince” graphic novels can be read standalone without having read the “The Shades of Magic” novels but I’m not certain how well that works as the graphic novels don’t spend time on the magic system, and magic is a vitally important part of this world setting.  Though mileage may vary, my friend was introduced to Schwab through the individual comic issues of this series and enjoyed it without prior knowledge.

The Rebel Army is the final volume in V.E. Schwab’s, “The Steel Prince” graphic novel trilogy.  The series tells the backstory of Prince Maxim Maresh, future King in “The Shades of Magic” novels, and how he gained the title of Steel Prince.  Overall this is a fun series but it tries to cram a lot of story in a short format, the second book in particular suffered from this, each graphic novel could have almost been it’s own novel.  I wish there was more room for the stories and characters to breathe, perhaps this is a bias I bring to these comics, I like big books! However, that would have led to a much longer project.  It was only due to this being a graphic novel series that Schwab was able to fit telling Maxim’s story into her writing schedule.

Maxim arrived in Verose to prove that he can be a leader and over the previous two volumes he has proven himself to the soldiers under his command and gained a small measure of respect from the rowdy, cut-throat citizens of the city.  A new threat, a self-titled ‘rebel army’, is attacking every port city along the Arnesian coast, swelling its ranks with new followers heeding the cry to overthrow the crown.  This rag tag, but growing, army is heading towards Verose, with the intent of taking the capital, London, afterwards.

Maxim questions how the army went from pirate marauders to a small fleet seeking end of Maresh rule.  The garrison will not be enough men to repel an attack of this magnitude and the army is moving too swiftly for reinforcements to arrive from the capital.  It is up to Maxim and his close companions to find a way to stop the army before it can steam roll over Verose.  This means convincing the entire city into an uneasy alliance with the soldiers, the fate of the kingdom at stake should they fail.  Maxim has grown as a leader, both in leading troops but also in inspiring others to follow.

Words are powerful things. Strung together, into messages, oaths, rallying cries.  Sword can be met with sword and magic with magic, and words can be wielded with must as much might.  Today, Maxim Maresh is not the heir to crown.  He is not the commander of the Verose guard.  He is not the Steel Prince.  He is a messenger.”

Short though these stories may be, they are an excellent background into who King Maxim is and the history that shaped him into the ruler we meet in A Darker Shade of Magic.  I was totally sucked into the first volume, and enjoyed two and three but they did not quite meet the expectations I had after the first.  However, if you are a fan of the “Shades of Magic” trilogy, I would recommend this as worth your time!