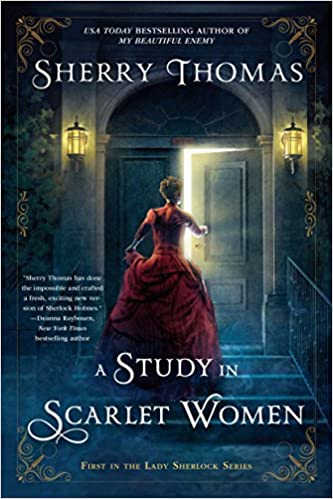 A Study in Scarlet Women has been on my radar since last year’s “Classics and Retellings” book club, when a number of Cannonballers reviewed it as an adaptation/retelling of Arthur Conan Doyle’s famous work. I was excited that CBR12 BINGO gave me an excuse to pick it up from my library.

My enthusiasm arc for this novel can be visualized as a bell curve: I went from “hmm, ok but. . .,” to “wow, this is great!” back down to “mildly positive” by the end.

First of all, things I liked about it: I do love that we have a new, strong female heroine. This novel isn’t shy about painting a portrait of the times and the limitations that society places on the heroine. It doesn’t matter how smart Charlotte is; as a woman, few avenues are open to her. Even her father, who recognizes his daughter’s sharp intelligence, treats her more like a quirky pet and her ability to solve riddles as more of a parlor trick than a means by which she can achieve success. When Charlotte’s plan to force her father’s hand into paying for her education goes wrong, and she becomes marked as a “scarlet woman,” even those few options she thought she had disappeared. “Had she prowled the city with energy and determination, she’d still have returned footsore and empty-handed. The schools were closed to her. The professions were closed to her. Just about anything that had a possibility of a satisfying career was closed to her.”

We meet another strong woman in Mrs. Jebediah, the widow who takes Charlotte under her wing. In their first conversation, Mrs. J. makes it apparent that even Charlotte has underestimated herself. “But tell me, Miss Holmes, what do you think you are most well suited to do?” Nobody had ever asked Charlotte that before; it becomes obvious that her life’s goal to run a boarding school was merely the most satisfying position that, as a woman, she thought she could achieve. Even her dreams were scaled down to society’s expectations. When the pair team up to solve cases for clients, the widow continues to push Charlotte to appropriately value herself. She tells Charlotte, “Remind yourself that you’re far more likely to undercharge than to overcharge, my dear, because you don’t yet understand your own value and you’ve never been taught to demand your full worth. That’s why I appointed myself the bursar of this operation, because I’ve had to learn both.”

Now, my biggest problem with this novel: Charlotte is not Sherlock Holmes. I love adaptations of Arthur Conan Doyle’s work, because I enjoy seeing how modern authors can take the foundation that Doyle provided, keep it true to the spirit of the character, and, in many instances, make it better. Two fabulous adaptations I read last year were Kareem Abdul-Jabbar and Anna Waterhouse’s Mycroft Holmes series and Anthony Horowitz’s stunning House of Silk, the best Sherlock Holmes-inspired novel I’ve read to date. The problem with Charlotte isn’t that she’s a woman; I was intrigued by the idea of a gender-swap. The problem is, other than her uncanny powers of perception, I don’t see the original character under the piles of silk and bows. The attempts to connect Charlotte to Doyle’s detective are half-hearted at best. For example, I didn’t buy the idea that Sherlock Holmes would be “adorable,” but, in the right hands, I could be convinced otherwise. Thomas’s attempt to convince me consisted of one conversation between Inspector Treadle and his wife where they reminisce about what they used to speculate Sherlock Holmes (whom they have never seen) might look like. “We concluded that he is likely to be dark-haired, pale from spending his days reading by a lamp, with piercing, intelligent eyes, and a somewhat patient demeanor, since he must find the rest of us trying. . . .I believe we also thought that he’d be dressed well but simply, she he wouldn’t occupy himself with frivolous concerns.” Unfortunately, that simply acknowledges that Charlotte doesn’t meet my expectations of what Sherlock Holmes might look; it doesn’t do anything to mitigate those expectations. Similarly, other references to Doyle’s work, such as the suggestion that Charlotte’s sister Livia will record the cases using false names and places, seem to be tacked on at the end to remind us that this novel was supposed to have been inspired by A Study in Scarlet. This is a colossal stretch, to say the least.

I would read more books in this series on the strength of the characters, but I’d be prepared going in that I’m not getting Sherlock Holmes. I like Charlotte. I like the widow. I like Inspector Treadle (who, by the way, hijacks a large middle section of the story. This is another strength for the novel and weakness for the case that this is a Sherlock Holmes adaptation). Charlotte is a strong, feminist character, and we need more of those. I have to wonder, though, if we wouldn’t be better served by a new heroine rather than a weak imitation of an old favorite.