Y’all, I think I’m about to leave my first hate review. Or maybe it’s more accurate to say a bewildered review, because I cannot fathom how anyone gave this book the green light to get published. I thought I was starting another cute YA romance, but nope.

Here’s the description of the book on Amazon:

When a guy named Martin Nathaniel Munroe II texts you, it should be obvious who you’re talking to. Except there’s two of them (it’s a long story), and Haley thinks she’s talking to the one she doesn’t hate.

A question about a class project rapidly evolves into an all-consuming conversation. Haley finds that Martin is actually willing to listen to her weird facts and unusual obsessions, and Martin feels like Haley is the first person to really see who he is. Haley and Martin might be too awkward to hang out in real life, but over text, they’re becoming addicted to each other.

Here’s the thing: If I need to read the description in order to understand what the hell is happening in the book, you’re doing it wrong. By page 61 – which is where I gave up because I DNF this book – all I could really tell you is the characters’ names, what year they are in high school, which classes they take together, and a couple of their friends’ names. Oh, and I think the other Martin Nathaniel Munroe II is a cousin? Maybe?

This novel is written entirely as text messages between Haley and Martin. There are probably effective and engaging ways this can be done. This book is an example of the opposite. There’s about 1 exchange of texts messages (of varying number) per day. You can tell that the pair is texting a lot more often than that because it’s clear there’s a lot happening in their lives based on what they refer to and the readers aren’t privy to details. Again, this can be done well. You know who did something similar well? 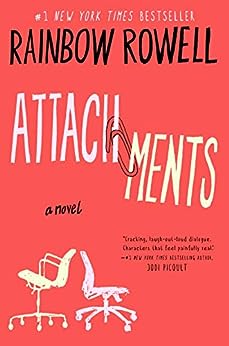 Of course, Rowell has her characters e-mailing rather than texting, and the entire book isn’t e-mail only. But I think the analogy stands. In Attachments, we know that Beth and Jennifer have lives outside of work and presumably email each other more than just the times that we get to see it, and that’s ok because I don’t feel lost. With Technically, You Started It, I kept wondering if I had somehow skipped a page or if a line of text got cut off.

Speaking of the formatting. I had to keep adjusting the font size on my Nook (and even in Adobe Digital Editions) because sometimes parts of a line did get cut off. I could see enough ink to know that there was another line, but I couldn’t view the whole thing and it wouldn’t show on the next page, so I’d have to go in and adjust the font again.