It’s always a bit of chore jumping into superhero comics. They are a bit like daytime soap operas: years of back story, dozens of characters, and high drama that doesn’t really mirror real life in any conceivable way.

So it’s with some trepidation that I pick up any of these books these days. Except for the rare foray into the genre for Cannonball Read, I haven’t really read comics in about twenty years. So I’m pretty out of touch with everything that’s happening across the various universes. I have seen all the MCU movies, though, so there’s that.

And Planet Hulk was one of the foundations for Thor: Ragnarok. Oddly, considering Thor isn’t even in the source material. It’s a Hulk story.

But, it’s a well-regarded story. Some even think it’s the best Hulk story.

Maybe it’s because I don’t read a lot of comics, but I found this incredibly underwhelming.

The general story is that a gamma bomb goes off, and the Hulk loses control of himself, which then causes him to attack Las Vegas. Convinced that he is too dangerous to stay on Earth, S.H.I.E.L.D and the Illuminati (I’d never even heard of them prior to reading this book) trick Hulk into attacking a rogue satellite that can detonate all of the Earth’s nuclear weapons. Once they get him into space, they exile him to a distant, uninhabited, planet. Only he encounters a wormhole, and never makes it there.

Instead, he lands on the planet Sakaar, which is a pretty terrible place. It’s arid, and ruled over by the Red King, who is terrible. Hulk is made into a slave, and is forced to fight in gladiatorial arenas. And, no surprise, he’s really good at fighting.

He gathers about him a number of other fighters (called the Warbound), and fights his way out of enslavement. He even ends up becoming a popular figure among the people of Sakaar, and challenges the Red King for supremacy.

And it’s all….okay. I don’t know. I enjoyed it. I didn’t always get everyone’s motivations.

The basic conceit of this story seems to be that Tony Stark, et al, betrayed the Hulk, but this is something that is never explored. Hulk takes this even further by (spoilers ahead) accusing them of blowing up the planet, which they weren’t actually responsible for.  I don’t know if it’s limitations of the medium or just a failure on the part of Greg Pak, but I don’t feel like this is something that is ever really explored adequately. The hypocrisy of superheroes who are responsible for unmeasured collateral damage holding another superhero responsible for one incident is briefly touched on, but it’s handled fairly cavalierly.

And that’s certainly an interesting subject to explore. They do so in the MCU, after the events of in Sokovia during Avengers: Age of Ultron. Superheroes wreck havoc on the world they are trying to save. The longer heroes are around, the need for more action and destruction. Spectacle is a major selling point for these stories. This truth reached its nadir, perhaps, in Zach Snyder’s Man of Steel, where Superman and Zod destroyed Metropolis for what felt like half the movie.
But there’s never any real accountability for the destruction.
For someone like the Hulk, whose catchphrase is literally, “smash”, this seems like it should be a central theme explored by all the books. The bigger he is, the more powerful he is, the more destructive he will be. As the body count rises, he becomes more a force of nature than an actual being. How often can a community suffer the destruction of a hurricane and come back? How many times can the protector of your community destroy your home and still be called a superhero?
These questions, and others like them, are never really handled in this series. This series seems more interested in providing Hulk with an excuse to come back to Earth and beat up his friends on some misguided quest for revenge.
Which is okay, I guess, if your main interest is in the aforementioned, “Hulk smash!”, then I guess that’s fine. If you want an existential exploration of heroism, though, this probably isn’t your book. So, your mileage may vary on this one.

This follows Planet Hulk, starting with the return of Hulk to Earth. (Spoilers) A Huge part of Sakaar was destroyed when Hulk’s ship blew up. A million people were killed – including the Hulk’s wife and queen, Caiera. There isn’t much story here to explore. Hulk is angry, and his target’s are basically the Avengers and the Fantastic Four. They offer little resistance. For those not familiar with the character: the angrier Hulk is, the stronger he is. And he’s angry, here. Like, super angry. Like, his anger meter is on 11.

It’s worth noting, I absolutely didn’t like the art in this book. John Romita Jr, the artist, has a long and storied career in the industry. I wasn’t much of a fan when I read comics as a teenager, and I’m not much of a fan now.

It’s not that he’s a terrible artist. The style just really doesn’t appeal to me. Especially when compared to the art of Carlo Pagulayan, who penciled the Planet Hulk story. 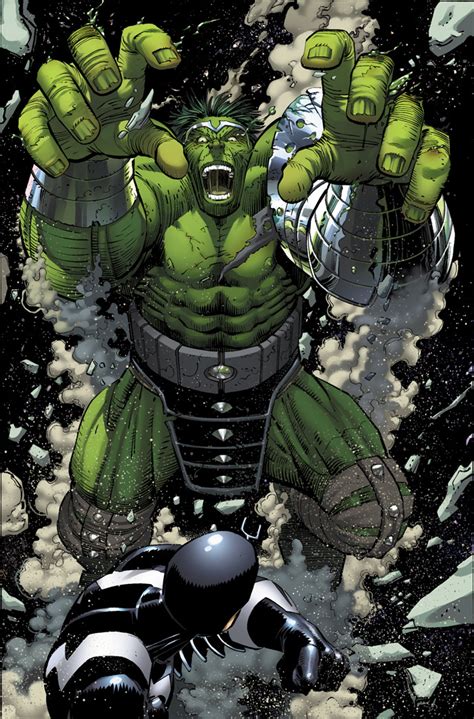 My problem with this book can really be boiled down to the Hulk being too powerful. And because he’s too powerful, the Avengers have to devise novel strategies to contain him. In other words, space lasers. It gets a bit silly, and the danger becomes unrelatable. The story becomes untethered to anything that I find interesting.

So uninteresting, that I’ve spent a few days idly wondering how I was going to review a book I was so indifferent to. As you can see, I didn’t really come up with a strategy.

In sum: Planet Hulk was okay, World War Hulk was the kind of story I forget almost as soon as I’m done reading it.