Live Now - #CannonBookClub Discussion of Last Night at the Telegraph Club by Malinda Lo
> FAQ Home
> Genre: Fiction > “A shadow came over 42nd and Eighth Avenue. It completely covered the street for a split second.” 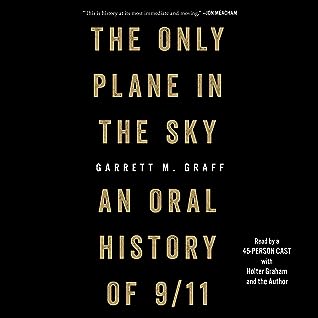 I really enjoy the format of an oral history — but most of my experiences with that have been pop culture stories (Vanity Fair’s archives have some amazing reads). I like to see all of the different perspectives people hold of the same story, and I like to watch that story come together in their voices. The Only Plane in the Sky is an oral history of 9/11. This of course is not the light-hearted pop culture reading that I’m used to. But it is an event that I connect with. And I hope this doesn’t sound disrespectful, but just like hearing about the details behind Friends or Seinfeld coming together connected with my own experience of those shows, reading this book and learning about the details of an event that I remember explicitly from my own perspective — but hearing it in the voices of hundreds of people who experienced it differently than I did — was really an incredible experience.

“The significance of the date of September 11th, 9/11, was seared into the nation’s collective memory, altering the way those affected looked at the calendar and even clocks.”

Garrett Graff collected hundreds of interviews and pieced them together in an easy-to-follow timeline of the events of September 11th. There are a few references to events from the day prior and days after, but almost every page has something that happened on that day. Some of the stories were familiar, and many were not. There was definitely a lot of information here that I wasn’t previously aware of. In particular, I really did not know much about the events that happened at the Pentagon on that day. Graff gives the Pentagon almost as much space in the book as he does the events of the Twin Towers. Same for the plane landing in Shanksville. Interviewees point out that often, the victims of those two tragedies are not afforded the same respect or attention as those who died in the Twin Towers. That is definitely not the case in this book.

It is, obviously, a really hard book to read. The stories of the people who were never found are particularly affecting. I Googled a couple of names while reading it to see if they were ever found. One of the hardest parts to read, however, came in the chapters where are they interviewed children about their memories of that time. This was the only quote that truly made me tear up: “I was a pretty shy and quiet child, but I had made my first friend on my own. After that day, my friend came over and said, “We can’t be friends anymore, Hiba. My mom said until this is over, we can’t be friends anymore.”
The after effects of September 11th are seen in our everyday lives. It’s amazing to think that there are children this year in college this year who were not yet born when it happened. I have heard many times from my mom her specific memories of the day that JFK was shot. In fact, I could probably recite her version of that story to you now. As horrible as it is to talk about such a tragedy, I do hope that those who remember their experiences on that day continue to share them with the younger generation so they will also know the stories of heroism and bravery that occurred when our nation was affected in such a way.