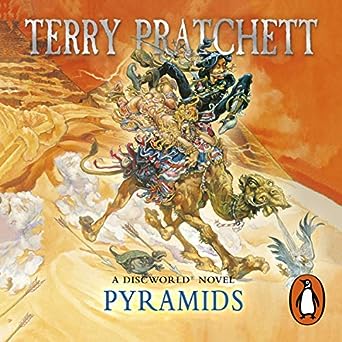 Another year, another book down on my meandering tour through Terry Pratchett’s Discworld. This time it was Pyramids, which I had high hopes for because it was published around the same time as Mort, which was great, and Guards! Guards!, the perfection of which is only muted by the fact that Men at Arms and Feet of Clay are even better.

Pyramids was… eh. It was fine. There were some funny moments. I listened to it on audiobook, and as usual enjoyed Nigel Planer’s narration.

The story is about Pteppic, the son of the pharaoh-god-king of the Ancient Egypt-analogue Djelibeybi–a rather weak joke that I think would be completely lost on me if I hadn’t listened to it on audiobook. (Coincidentally, I had to look up how to spell these names). Pteppic has trained as an assassin in Ankh-Morpork but returns to his kingdom when his father dies. Pteppic has dreams of modernizing the kingdom but finds himself thwarted at every corner by the High Priest Dios. And then there’s the matter of his father’s pyramid…

I appreciated the satire of Ancient Egypt, even if the plot was largely bonkers (and not necessarily in a good way). I am afraid that the humour got a bit scientific and mathematical at times for me to really get into it. A highlight for me was actually the satire of the ancient Athenian symposium; perhaps it’s that my background as a Classicist let me appreciate what Pratchett was doing there.

I’ve heard that Small Gods, which is somewhere on my reading list, is a good one. I hope might offer me more of what I enjoyed about Pyramids but with more humour and perhaps even a better plot. Overall, this one wasn’t quite as boring as Equal Rites, but it also doesn’t have such a great pun in the title. Or Granny Weatherwax.