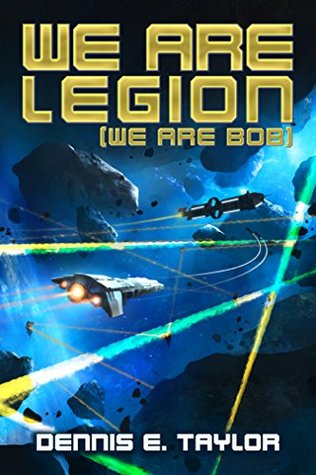 I don’t read a ton of science fiction these days, but every once in a while something catches my eye. We Are Legion (We Are Bob) caught my eye while on sale at Audible, and it really was a fun (and very geeky) read.

“I had three issues that bothered me. Was I conscious? Could I actually consider myself to be alive? And was I still Bob? Philosophers had been going on and on about this type of thing for centuries, but now, for me, it was personal. A human, regardless of their opinion on the subject, could depend on being a human. The minister’s offhand reference to me as ‘it’ and ‘replicant’ had stung at a level I was just now starting to appreciate.”

Bob, who’s never really liked people all that much, agrees to have his head frozen in the event of his death. Much to his surprise, after getting hit by a car, he finds himself reanimated in the future as a computer program — in a world where such people (replicants) have no rights at all. He’s put in charge of a project: controlling a probe sent into space to find habitable planets.

There’s a plot involving the conservative right wing government which has taken over the United States, and how they attempt to control Bob as a weapon against other governments. But the fun part here is watching Bob figure out how to replicate himself, creating more probes “manned” by other Bobs. It’s really a very funny book, with a lot of Star Trek references:

I enjoyed watching Bob create VR in order to make himself feel more human. After recently reading Bill Bryson’s The Body, I know that the brain makes up a picture of reality for us based on various sensory inputs, so it really didn’t seem too far-fetched. And his interactions with the other Bobs cracked me up. Each Bob has his own mission, and one spends a lot of time watching a sentient species on a planet — that was probably my favorite section.