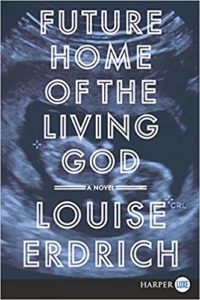 A young Native American woman learns that she is pregnant in a time of miracles and disaster; nature has gone haywire. Evolution has sped up, gone sideways, and/or stopped all together. Times are trying. It is a particularly frightening time to be a single person with an unplanned pregnancy- especially when religious-esque government agents are collecting and imprisoning pregnant women.

Our narrator, Cedar, gives us her story through the pages of her diary. She is keeping accounts of her body and the world around her to give to her future child. The world is terrifying and wonderful in equal time; animals morph and change, family secrets come to life, and saints begin to show themselves to tribal elders along the way.

There is an obvious connection to Handmaid’s Tale to be made, but Future Home of the Living God is more in-step with Erdrich’s rich and varied catalog. Both stories are chronicles or the war on women, and both stories are narrated from an incomplete point of view, but Erdrich trademarks remain abound. Her prose is lyrical and mysterious. Her family histories are rich, warped, and deep. The greater world surrounding Cedar and her contemporaries is confusing, antagonistic, and ready to strike- but the eye of Cedar’s hurricane- her self, her unborn baby, and her mercurial family- remains solid and unwavering despite attacks both physical and spiritual.

There is always something to learn when reading Louise Erdrich; a fact that has kept me coming back to her for over a decade. In this instance I was introduced to the story of Kateri Tekakwitha – the first ever Native American to be canonized by the Catholic Church. I am not a religious person; I was raised Catholic but I no longer subscribe to any faith or denomination, but the cryptic and often unsettling stories of saints will always hold my interest.

I recommend taking the time to really sink into this world. I lent it out immediately after finishing, and it has since been passed outward to two more friends of friends.

Trigger warning: there is a character that speaks frankly and frequently of taking their own life.