Interestingly, in several ways I liked Persepolis 2: The Story of a Return better than the first book. And yet, I enjoyed the first book more.

I put this towards Marjane Satrapi’s continuation of the first book by picking up where she left off but this time showing more growth. Literally (she has a growth spurt and puberty hits hard) and figuratively (learning about “new” authors, ideas, respect different cultures seem to have, values, drugs and more.). Though about the same amount of years go by, the radical differences of Vienna and Iran cannot but change Marjane. 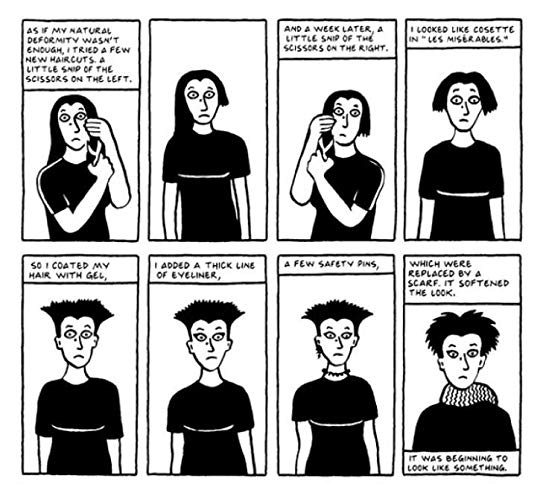 But when she returns home to Iran, she has two issues: The first, she wants to be a child again. She wants the names of the streets to not have been renamed, she wants her old friends to have not changed (but when they have she is disappointed, yet, in the ways they have not changed, she is disappointed in that too), she wants her mother and father to still treat her as a child. She pouts even like a child (not wanting to see her family or friends). And the second issue is at the same time wants the freedoms of the west still (forgets her veil, wants to sleep with her boyfriend). She wants to be an adult to make her own choices (to get married to her boyfriend regardless if her father does not agree).

The contradictions of her world still work. Like before, where her communistic background and upper-class upbringing seemed to clash, the taste of freedom colors her Iranian home, yet welcomes the fact Iran is becoming more “modern” and “western” feeling, but she wants that comfort of before things changed.

The misadventures she had in Vienna and back home, would be considered dramatic and hyperbole had they not actually happened.  This is where the stronger parts come in play. There is more story and action. Not like the action of war, but things happen to Satrapi. Here she learns about drugs: deals them, abuses them. She learns about sex (from being more conservative to much less so). She learns about how people are different. She sees the rise of obvious and subtle racism directed towards her and others. She even lives on the street for a few months in winter. The only thing that probably saved her (and yet, almost killed her) was her stubbornness.

There is language, sexuality, obvious drug use, pages on her attempted suicide. These books are not for the sensitive reader, but for at least ages 14 and up.