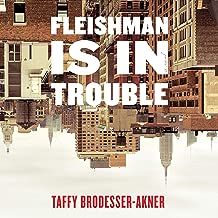 I am seven reviews behind and I’m determined to get these done before I start another book. This grouping is my ‘grown up’ books before I get to another four Young Adult books.

Fleishman Is In Trouble: I adore Taffy Brodesser-Akner’s work as a profile writer so I was very excited to pick up her first novel. I felt simultaneously very seen by and put off by this book. Toby Fleishman is a divorcing father of two who finds himself unexpectedly saddled with his two children when his estranged wife disappears for weeks. Toby has had a sexual renaissance since his separation; he is furious with his ex, Rachel, not only for leaving the kids with him unexpectedly but for putting a damper on his evening exploits. Every relationship has two sides, though, and the latter half of the book allows a look at Rachel Fleishman’s thoughts during the turbulent few weeks detailed here. The entire book is narrated by Toby’s college friend as an omniscient presence- the one aspect of the writing that I didn’t think worked very well. Otherwise, this was a clever and insightful look at a family crisis caused by mismatched expectations and poor communication. Four stars.

A Nearly Normal Family by M.T. Edvardsson (and translated by Rachel Willson-Broyles) is another family drama with a mystery at its core. Stella Sandvell is arrested for murder shortly after her eighteenth birthday. Her father, Adam, is a pastor; her mother, Ulrika, a lawyer. Stella has had trouble with behavior and grades since her early teens but has not had any significant issues with the law until her arrest. The story is told in three parts, each narrated by a different member of the family. Adam, the father, is up first. I nearly gave this book up before finishing the first section. Certainly something is lost to translation, but I had trouble determining if Adam is meant to be overdramatic and stupid or if this is the way a Swedish pastor would think and act. The second section is told from Stella’s standpoint, both in jail and in flashbacks to her earlier life. Stella’s voice is fresh and believable. Part three is narrated by Stella’s mother who is cold, calculating and still more natural than Adam. The story overall was interesting but resorts to the old “explain a woman’s actions as due to rape” not once but twice, which is lazy. Three stars.

The Silkworm is the second in the Cormoran Strike series and doesn’t improve on a second read. I initially read this when it first came out and found it intriguing; a second go-round shows bigger plot holes. Cormoran Strike is a private detective in London who lives in his office and has a single employee. Robin, his secretary/occasional investigative assistant, is hoping to be asked to take on more responsibilities at work but is hesitant to put her hopes in to words. The agency is tasked with finding a missing writer and quickly are ensnared in a macabre murder mystery. The drama of the book is high, but the more thought that I put in to this book the less it holds up. So 3.5 stars for entertainment.