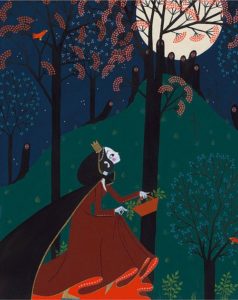 You most likely know at least one version of the classic story of Wild Swans by Hans Christian Andersen; but the illustrations by Charlotte Gastaut are what make this edition, retold by Xanthe Gresham Knight, fresh.

Knight’s version of the story has the young princess, Eliza, sent to live with a family in a village that has not been touched by the plague that took her mother. This is after her father remarries and Stepmother knows that to keep her safe, Eliza must leave. This is also after Eliza’s eleven brothers, arrogant in their youth and knowledge, but kind in their love of Eliza (especially the youngest), have been turned into swans by their stepmother. While, many might see this as a cruel act by the stepmother, there seems to be no malice in her actions. She wishes them not only safe from the plague, but to become knowledgeable in the way of the world. She will later, even sacrifice herself trying to find a cure for the plague.

The text is lofty and flowy, yet is not overly saccharine, even if the actions of the brothers (again, especially the youngest) can be a little “cutesy.” Even then, it is just a fairy/folktale that shows

the love these siblings have for each other and how they will sacrifice for each other. Of course, Eliza’s sacrifices will be even more physical than her brothers, as she weaves the nettles to make the shirts that will break the spell. The morals of the story are love, learning to sacrifice and earthly goods are not always the only or best way to measure wealth. And even though there is this sophistication to the text, the book is accessible to the older listener (5 to 8) and the older reader (ages 8 to 10) could read without too much difficultly.

In less than 50 pages, there is a plethora of events, actions and adventures. And each is accented by rich, bold, deeply colored and fantastically detailed images. They are not only reminiscent of its Scandinavian heritage, but there are elements of Russian folklore and even some Asian elements (which I  interpreted in the faces of some characters as well as the color usage). I could put an entire thesaurus of words that mean amazing, fantastic, creative, colorful and probably not hit on the word(s) I want. The best the English language has is breathtaking and stunning. 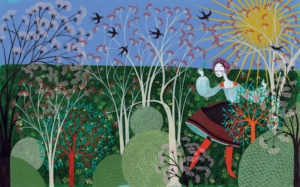 I would like to read Gastaut and Knights other work, Thumbelina now as well as explore other art by Gastaut.

As an Amazon Associate, Cannonball Read earns from qualifying purchases.