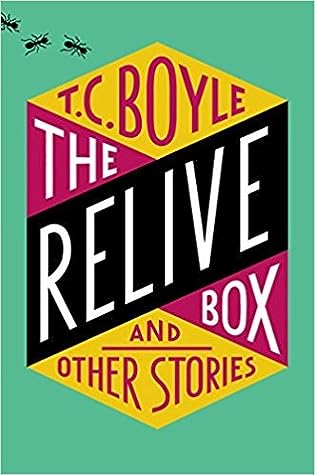 Short stories have recently become one of my favorite genres to tackle. There is something delightful about being able to, in one short sitting, devour a whole tale, a microcosm of a world and characters as a quick bite. Certainly this taps into my need for achievement, checking something off the never-ending to do list: progress is charted quickly and swiftly. Also, I have a bit of a reverence for short story authors, for how they are able to quickly cut to the chase and do something meaningful, with such limited literary space. A short story collection tends to leave me feeling a little off-kilter as I try to puzzle meaning but then it’s quickly on to the next.

T.C. Boyle is the master of leaving you questioning with his stark tales of the mundane. In this college he packs 12 stories into 272 pages, each story of varying length. Many were well-contained, but here were definitely a few that I really wanted to keep reading. The title story is about the “Relive Box” technology that has been developed that allows a user to relive any points of his or her life, and the impact of said technology on a father and daughter. Some of the other story topics include a severe drought, a bomb threat at a college graduation, a five pound burrito, and an Italian ant infestation. Some stories teeter toward speculative fiction, but most are firmly based in our reality, and the reader is easily able to put themselves into the action, wondering what they would do in the same situation. But, as is the case with Boyle, the stories are really about the people, people who often make poor choices or are struggling with consequences of their actions. There are no tidy happy endings in Boyle’s storytelling, just the messy and often absurd reality of life.

I recommend both this collection, and his novels, for thoughtful reflection.