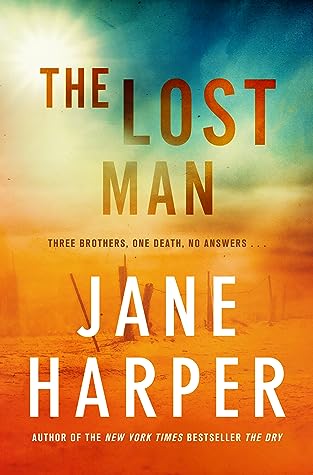 I have read a couple of Jane Harper’s novels (The Dry and Force of Nature, both of which I’d recommend) and what I love about them is the setting: her books take place in Australia (Far and Away!) but not in the cities — they’re set in tiny little towns in the Outback, a place so massive and wild and dangerous that it’s basically its own character.

“Life out here is hard. We all try to get through the best way we can. But trust me, there’s not a single person here who isn’t lying to themselves about something.”

The book starts with the two remaining Bright brothers standing at the “Stockman’s Grave” on their property in the Outback — the location of their third brother’s death. By all accounts, their brother Cameron walked into the middle of this deserted land and died of exposure next to a grave that stood there for 100 years. This sets up an investigation into Cameron’s life and his death by his oldest brother, Nathan. Nathan has been living on the edge of his family for years, after being shunned from the only small town nearby. He’s convinced that there’s more to his brother’s death than meets the eye.

This book was REALLY good. There is so much history buried in the family and in the town, and Harper takes her sweet time unburying it. I loved the character of Nathan — he’s smart and hard-working and he fucked up so bad years ago. He’s been living with his head down but can’t help but still up a little trouble to find out what happened to his brother. The plot is deliciously twisty and I won’t spoil a thing but I will say the ending was very satisfying. This book is a stand alone (The Dry and Force of Nature are connected) and it’s a great way to introduce yourself to Jane Harper’s writing.