> FAQ Home
> Genre: Fiction > Sometimes you can do everything right and things will still go wrong 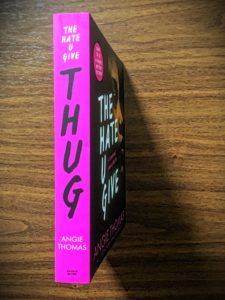 This won’t be a long review. I don’t have anything substantive to add to what’s already been written and said about Angie Thomas’s The Hate U Give, and I’m not sure it’s appropriate for me to say anything at all. As a middle-aged, middle-class white guy from the very white Deep Midwest, I’m several degrees of separation from this book’s intended audience, but that’s exactly why it’s an important read for people like me.

Starr lives in a rough neighborhood where everyone knows her because she works at her dad’s store. She also attends high school in a wealthy suburb because her parents want her to have better opportunities than they did. Starr keeps those two lives separate until the night she’s the lone witness to her friend Khalil’s murder by a white cop during a racially-motivated traffic stop. She struggles to deal with what happened, unable to talk about it, unable to let it go, until she realizes she’s the only person with a chance to bring justice for Khalil.

This is a world I don’t recognize and don’t understand and probably never will no matter how much I read or how many movies I watch. As I read this book, I felt like a voyeur, like a cultural tourist, trespassing where I didn’t belong, but those uncomfortable feelings are kind of the point.

This wasn’t an enjoyable read, but it was necessary and meaningful, with a story and craft that I very much admired. I’d compare the experience to watching Mudbound, one of the best (and most criminally underrated) movies I’ve seen: it was often excruciating and infuriating, and I had to step away more than once when I just couldn’t go on, but it was also compelling and eye-opening. I’ll never be able to fully comprehend the experiences of these characters, and by extension, the experiences of real people like them, so the best I can do is listen and learn. To paraphrase Angie Thomas herself: they matter, and their voices matter.