I’d been looking forward to reading this since I (finally) started reading Baldwin last year. When this became available at the library at the start of Black History Month it seemed serendipitous. That, unfortunately, is where the joy and happy coincidences ended. I’ve wanted to read this since I read Between the World and Me a few years ago. The Fire Next Time served as inspiration to Coates, at least in the format of crafting a letter to a child, Baldwin’s nephew and Coates’ son. More specifically, it was the first of two essays contained in the book that inspired Coates, “My Dungeon Shook.” Much like when I read Between the World and Me, I knew that unlike Coates and Baldwin, I am not forced to have these difficult discussions with my children about how the world sees them and it absolutely breaks my heart that nearly 50 years later, nothing of consequence has changed. Coates still had the need to channel Baldwin and fill the void he left because the black experience in America is not markedly different now than it was in 1963.

I feel the same way about Baldwin that I feel about Coates. I dream of being able to write like them. They write in the manner in which I think and I adore them for it.  While I listened to this book, I plan to purchase a copy that I can read and re-read and use to take notes. This is a book that demands to be read by everyone and it should be. I would assign it to every school if I could.

After reading A Promised Land and feeling upbeat, I started The Color of Law because we don’t deserve happiness in 2021. The Color of Law, subtitled A Forgotten History of How Our Government Segregated America, sets out to prove, and I think very effectively, that segregation was and is the result of government policy. More simply, the policies are de jure not de facto. It was not the actions of people or institutions acting with prejudice but instead the laws passed, from the national to the local levels, which encouraged discrimination.

The author cites many examples but primarily uses San Francisco and the surrounding Bay Area to prove his thesis. He argues that if the Bay Area, with its long history of progressive movements and causes, demonstrates such prejudice that by extension, other areas are also likely practice similar discrimination (or worse). Given that the author cannot describe every single region and every law nation-wide, I think that this assumption works.

Given that assumption though, wow, the results are absolutely damning.  At every single turn, the Bay Area failed to do the fair or right thing. Over and over again discrimination took place and was the direct result of the laws that were passed and enforced. One of the things said most often about this book is that the research is very thorough and top-notch and I agree. It is why I like the Bay Area assumption. This is a frustrating read but I think it is an important and necessary read as well.

Audre Lorde had no equal, and I’m again disappointed that I never had to read her for any of my literary theory classes in college. She’s a talented writer and a brilliant thinker, well ahead of her time, and reading Sister Outsider was thought-provoking and a bit humbling (for she wrote about things we’re STILL dealing with today–we have so much work to do left).

Because this is a collection, Lorde compiles these speeches and essays from a variety of experiences and occasions. Therefore, the quality varies somewhat. That said, while I usually give a compilation a 4 stars, the strongest essays in this collection so greatly outweighed the weaker pieces that I felt it deserved a 5-star review. She writes about being a woman, mother, lesbian, Black, scholar, and intellectual in an America that is too often hostile to all of these components, especially when put together. One of her best known essays is “The master’s tools will never dismantle the master’s house,” and it’s easy to see why. She makes an impassioned plea against aligning with patriarchy, and as we’ve seen, you cannot use patriarchy to achieve your ends without getting subsumed by it.

Lorde’s work is still incredibly prescient and should be required reading for budding scholars. She’s a lyrical writer, but she makes a sharp and poignant case for equity and promoting Black women in intellectual discourse.

View all my reviews

I’m really mad I did not read this book in college, because I think it would helped me develop a more well-rounded feminism. Angela Davis does not use the word “intersectionality” here, but she’s clearly angling for it. I also think that this book is vital for feminists/womanists, because it helps us address complex issues that surround equity for all who identify as women. As a former history major, I was glad to see the long (racist) history surrounding women’s suffrage frankly addressed. Until we work out the mistakes of the past, we cannot build a better future.

Davis’s chapters focus on the long history of suffrage, the agents involved, and the various movements that intersected in the fight for equality. She also provides a historiography of writers and their texts about suffrage, which shows us evolving views and how those views were shaped. She points out, well before many contemporary writers, how gender identity, race, and class shape experiences with inequality, and that much of the suffrage fight was centered on the experiences of white middle class women (such as myself).

This book is a must-read. While Davis is an academic, she unpacks complex ideas fluidly and helps you understand history from an ignored perspective. Reading diverse voices in history helps us rethink our perspectives and understand how events are shaped by different experiences.

View all my reviews

The Black Cabinet: The Untold Story of African Americans and Politics During the Age of Roosevelt by Jill Watts was our Mocha Girls Read book club selection in June. It became a very timely selection after the horrible death of George Floyd, which shone a brighter light on Black Lives Matter activism in America. As a Black woman, I was suffering from emotional exhaustion during that time. This history book actually helped put so many current things in perspective. We have come a long way, but there’s more work to be done.

The Black Cabinet is a deep dive into how the unofficial group of Black intellectuals brought about social change during the FDR years. Part one swiftly covers the early 20th century where things were pretty bleak all around. I was especially angry after reading about many presidents how blatantly allowed lynchings and refused to outlaw them. There was an initial “black cabinet” with Black civil servants meeting in a popular DC cafeteria. It was dismantled after race tensions spiked and Woodrow Wilson got rid of most of the Black government workers. The book then focuses on the individual backgrounds of the FDR period black cabinet. The five major figures are the educator and women’s club leader Mary McLeod Bethune, the Harvard trained economist Robert Weaver, the brilliant attorney William Hastie, the crusading newspaper publisher Robert Vann, and the Howard University-trained journalist Alfred Edgar Smith. I especially loved learning more about Mary McLeod Bethune as the Black women’s center in my hometown was named after her. Her friendship with Eleanor Roosevelt was vital to the cabinet being taken seriously by the president and his immediate staff.  This is quite a fact-heavy book that includes surfaced stories of smaller figures who helped shaped the cabinet. It leans more into historical text that presents what happened and less of a narrative text with commentary. I highly recommend this to be taught in schools to shine a light on how hard and long people have been fighting for civil rights in America. This would be a great gift for history and political enthusiasts. 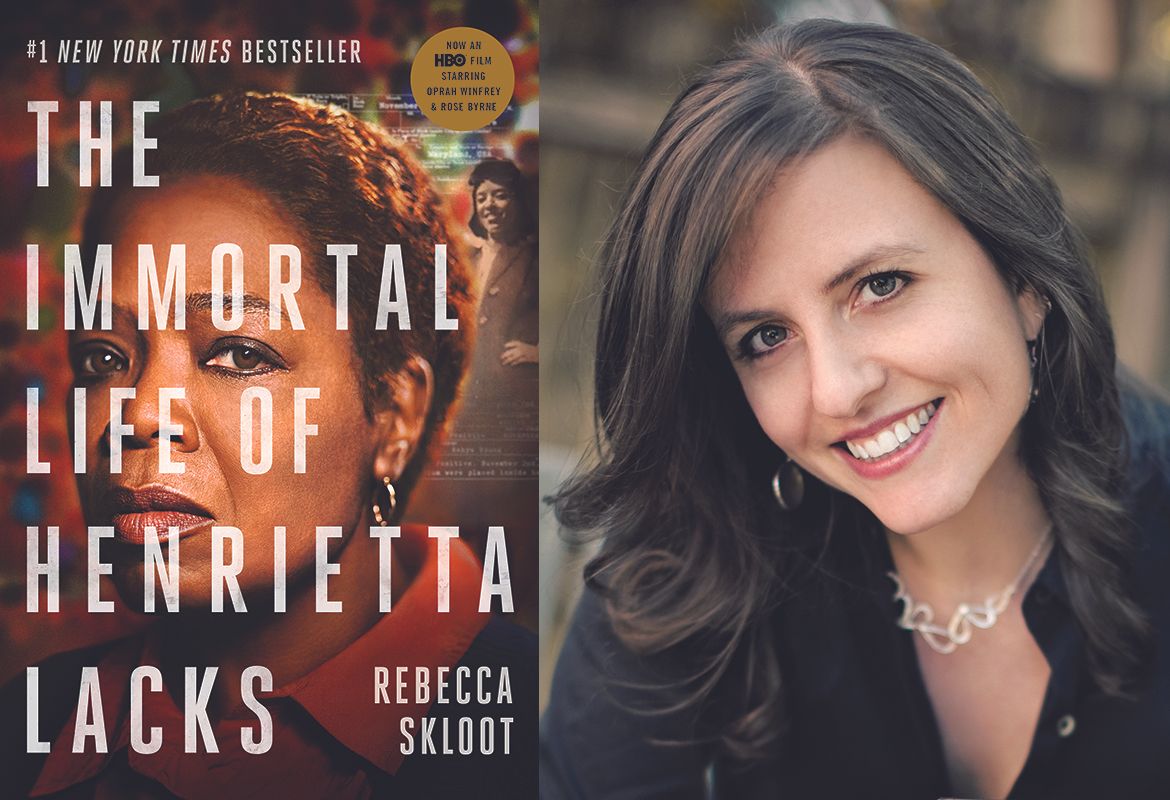 In contrast, The Immortal Life of Henrietta Lacks by Rebecca Skloot is part-history and part-narrative. Skloot reveals the medical history of the HeLa cells along with a first-person story of how she came to write the book and meet the Lacks family. Her entire research process is part of the book itself. It was an interesting read about how medical ethics and experiments have evolved drastically over time. It is not as illegal as one would think to keep cells without informing patients. Henrietta Lacks went to John Hopkins for cancer treatment, which unfortunately accelerated tumor growth of her disease. Her cells were collected and found to unexpectedly multiply indefinitely. Using her cells, eventually led to a cure for Polio and are still used to this day. Much of the book follows Deborah Lacks and her determination to learn more about her mother while fiercely advocating for recognition. It takes many months for the author to gain her and her family’s trust. These moments of the book were especially illuminating to me. Many Black people are rightfully wary of medical experiments after the Tuskegee incidents. It took me over two months to finish the book. I was exhausted from reading about Black people in pain, especially with COVID-19 disproportionately affecting Black and Brown people in the USA.

Despite how long it took, I was thoroughly fascinated when reading about Henrietta and her one-of-a-kind cells. And I wasn’t the only one! Oprah starred and helped adapt it for HBO. I haven’t seen it, but glad Henrietta’s contribution is finally being celebrated. This was another Mocha Girls Read selection for Banned Books week in September. A Tennessee parent didn’t like how it talks about vaginas even though it’s entirely clinical in the book. This a well-written and powerful book that makes history and science interesting! Many curriculums could benefit from its inclusion. If you’re even mildly curious about medical science, this is an excellent book to pick up. I would also recommend this for anyone looking for unconventional non-fiction narratives.

Read more of my musing on my blog, Confessions of a Pop Culture Addict.

This book has been on my radar for a while for a number of reasons, one of which being that President Obama listed it on his summer reading list in 2018. (Remember when presidents would share their summer reading lists? George W. Bush had a hefty reading habit as well. The current administration hasn’t shared one. So there’s that). I’m going to kick it over to President Obama’s one-sentence summary to get this review started. “An American Marriage by Tayari Jones is a moving portrayal of the effects of a wrongful conviction on a young African-American couple.”

This was a surprisingly light read of heavy subject matter. Jones deftly shifts the POV in each chapter mostly between Roy and Celestial as they ponder how it all went wrong. (You know early on that this won’t end well, and the cracks are evident right away). Neither of them are terribly likable people and they don’t seem to bring out the best in each other, but for me that just made the story more realistic and interesting. This wasn’t a beautiful supportive people ripped apart by tragedy. This was the story of a troubled couple impacted by a tragedy. In that way, the wrongful conviction was almost mundane, beside the point, just one of that paths that a black man’s life can take in the United States.

That for me is the impact of this book, seeing the matter-of-fact acceptance by the characters. It reminded me somewhat of a modern Revolutionary Road, but this was less an indictment of modern times and more so exactly what it is titled, a description of an american marriage.