> FAQ Home
> Genre: Children's > “A barbarian who cannot write a sentence of grammar and can hardly spell his own name.” (John Quincy Adams) 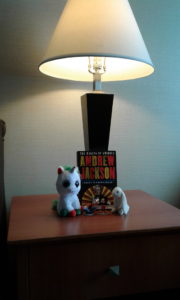 This book took a while to get through, not because it is bad, but I was reading other books at the time and the subject was not 100% grabbing me. This book (as the title says) shows us Andrew Jackson and his part in Making America. And this is not an easy subject.

Andrew Jackson: The Making of America is the second book in this series). Alexander Hamilton was the first and Lincoln will be the third and Susan B. Anthony: the fourth. So far, Teri Kanefield is the author of all of them.

We get to look at the start of our country’s political scene. Jackson was in the first 10 presidents, so they were learning what the “rules” were. He was the first “back woods” president, and one of the first “elected by the people” president (or at least that is what he thought/felt). The seeing parallels to today’s world/President are not subtle. You have a president who took his word, thoughts, feelings, rewarded his buddies and governed by his whims many times abnd this was how the law of the land was enforced. His biases and prejudices put this country into a financial depression (one of the longest in its history) and created the rulings for slaves and Native populations for years to come.

Jackson was not always a pleasant individual (loved by those who loved him, hated by his rivals), he had beliefs that were not unusual of the time (slavery, native population rights and the bank to name a few) was not always politically correct and he loved as hard as he hated. But Kanefield helps show the reader (about ages 10 to 14) where we came from and the people and things that shaped us as a nation. The book includes selections of Jackson’s writings, end-notes, a bibliography, and an index.