> FAQ Home
> Genre: Comedy/Humor > Days of Our Trying Not to Get Humanity Blown into Smithereens 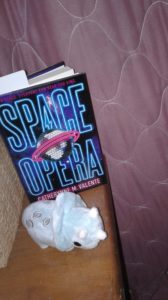 By the time I was not even halfway through Space Opera by Catherynne M. Valente I thought, “This is one screwed up book.”

As one reviewer on Amazon put it, “it is a barrage of fluff” (more later). It is all these strung together words just to put words together. They are not run-on sentences but run-off-the-page-turn-left-at-the-corner-and-keep-going-on sentences. The story, once you get into it, is easy enough to understand: a has been singer (as one of my coworkers put it, “a Meatloaf like performer” but I say any glam-rocker that was not Bowie) and his band have to save the world from destruction by going to an American Idol-like contest (well… Alien Idol) where the prize is you get to keep your planet movin’ and groovin’ in the solar systems and not completely destroyed. Of course, the competition can be cut throat (literally, or at least you will lose your voice when another contestant points a giant remote at you) and the wine, women? (maybe as one planet has six different genders) and song are flowing.

Reviews of Space Opera likened it to The Hitchhikers Guide to the Galaxy (though having missed the book, I can only go by the movie I saw and say, Yes, I get that), Rick and Morty (though never having seen it, I cannot say) and my favorite, Jem and the Holograms in space. However, the best way to describe this book (and I have stolen this word for word from that Amazon review) “It is a barrage of fluff, trying too hard to be edgy by cumulating adjectives in endless sentences.”

Which I said with more words. Which is probably why I forgive that. It is a writing style that will not be for everyone. Due to the witty lines (in fact a lot of witty lines) these longer descriptions can be worth it. There just needs to be substance behind them is all. But sometimes substance gets lost in all that out-of-this-world hyperbole.

This makes the story easy to understand, but not the themes. Valente is dealing with gender (multi-genders to a species or one saying “her” because they like the style that Earth gender tends to wear), sex (ever brushed someone’s hair so good that they got kinky and literally showed you their emotions?), what does “sentient” mean and can humans really be expected to not try and blow up the rest of the universe since look at what they have done to their own planet (anyone seen a dodo recently? Do the Mother Teresa’s make up for the Hitler’s?). And much more.

I did not realize (until writing this review) that Valente is the author of The Girl Who Circumnavigated Fairyland book, sequels and other titles. This shows her appeal can cover almost anyone. If this is not for you, try something else. Space Opera is aimed at adults, but I could see the high teens trying it. If you like over-the-top drama and realistic science-fiction you might like this.