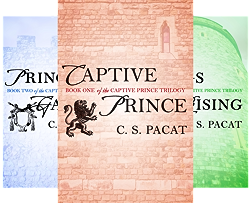 This is the story of how I read something wildly out of my comfort zone and learned from the experience.

My reading goals for this year have been to a) read more female fantasy writers and b) don’t buy books but use the library (part of an ongoing frugality goal). I have been pretty successful in both–I don’t think I’ve read a book by a single non-academic male author (I don’t include academic books in my write-ups), and I have only purchased one book this year (I Have Always Lived in the Castle, because I read the sample and wanted it NOW but it wasn’t then available on my library’s Overdrive).

In order to work on these goals, I’ve been going through the fantasy list of my library’s e-books. I thrive on recommendations, so I’ve been a bit at a loss in going by descriptions. But Captive Prince seemed right up my alley: I adore reading about the political machinations and conflicts of made-up countries.

What the description did not say was that there is a whooooole lot of sex in this book. Now, I’d like to think I’m not a prude. I enjoy well-written sex scenes as much as anybody, but I also find that well-written is often not very graphic (the sex scene in Uprooted is literally the sexiest thing ever and it doesn’t have to name any parts or describe things as ‘masts’–side-eying you, MARTIN). I was turned off a little bit at the very beginning when the main character, Damen, is basically getting felt up by some hot blonde woman. It felt very male-gazey, which I was not really expecting in female-written fantasy, but hey, whatever; I was bored and needed something to read. But it also did not really prepare me for what I realized about halfway through, which was: huh, this is definitely M/M erotic fantasy. (I love that it took me about half the book to actually realize this, because I sort of thought all the sex was just… I dunno, world-building? More on that later.)

Hook for Book I:
Damianos, Prince of Akielos, is captured in a political coup when his father dies and his brother seizes the throne. Damianos is sold to the enemy nation of Vere as a slave… a sex slave (gasp!) but as his nickname ‘Damen’, not Damianos, as his brother wants him believed dead. Damen’s new owner is Prince Laurent of Vere, who hates Akielos because Damen killed Laurent’s older brother on the battlefield several years before. Laurent hates Damen for everything he represents but Damen cannot help but be fascinated even through his own hatred for the prince’s cruelty. Damen must escape Laurent without anyone finding out his true identity and save Akielos from his brother’s tyranny.

As for my thoughts, I’ll just do bullet points here because it has been a little while since I read them…

Overall… they were fine. I’d probably give 2.5 stars rather than 2. I kept reading them and did enjoy them while I was reading (as I said, the sexual tension was great and definitely kept the books going). And I’m glad I read them, for the aforementioned reasons of expanding my horizons and going out of my immediate comfort zone. But I’m not sure I would recommend them to anybody unless I knew that they liked this sort of book. If I were looking for sexy times, I’d probably read more Jacqueline Carey… which I probably ought to do!