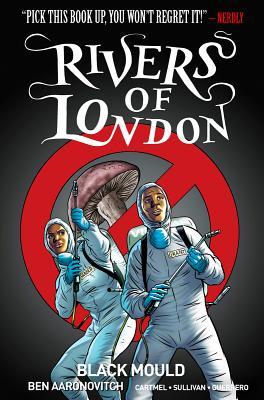 I raced through Rivers of London: Black Mould when I brought it home from the library (pro tip: if a book is brand new and it’s not on the shelves but it’s definitely in the catalog, ask your librarian to check the back room! maybe it hasn’t even been shelved yet!), but honestly it didn’t make much more of an impact on me other than to keep moving the Rivers of London universe forward for me.

Not that that isn’t of value, because of course it is of value, but I have gotten so hooked on this series, and am dying to know what’s going to happen with the major story arc, so Black Mould, which is another “Monster of the Week” episode that keeps the story rolling, is kind of like a bandaid on the broken leg of my heart that wants more. As it were.

There is value to the argument implied by these graphic novels that there is more to the lives of a group of fictional heroes than the evil that they fight. Reading these quick jaunts back into Peter Grant’s world is like watching the YouTube videos that Marvel produced where Thor is just hanging out with his roommate in Australia while “Captain America: Civil War” is happening. Sometimes, the police are just solving cases.

And in the case of all of these, and Black Mould is no exception, the cases are still supernatural delights, even though they have nothing to do with Lesley May and the Faceless Man. I like Peter’s partnership with Sahra Guleed, and I enjoy the way all of the characters are drawn. If I can only have Peter in small bites for the next while, it’s better than starving til my next meal.