Registration Is Open! Sign Up Today
> FAQ Home
> Genre: Fiction > Maybe it’s not that I hate the romance genre, maybe it’s that I have a low tolerance for predictability 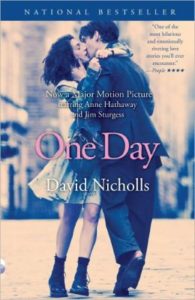 A brief aside: I don’t normally like book covers that have anything to do with the film adaptation, but the normal cover of this book is so bland and forgettable, I’m using the movie tie-in cover here. It has a more classic look to it.

Dexter Mayhew is a charming playboy, absolutely gorgeous to behold. And he knows it. Emma Morley is a beautiful and intelligent woman; a little snide and politically conscious. They spend the night of their graduation from university together before beginning a years long friendship that sees them never quite fulfilling the promise of romance that was their one night together. Dexter spirals out of control on drugs, alcohol, and beautiful women too numerous to count. Emma drifts through a life having not really attained professional or intimate satisfaction. Dexter is all fun and impetuousness, while Emma is socially conscious, sheltered, and consigned to a life of spinsterhood.

Or so it seems, at any rate.

The book itself is told over a twenty (roughly) year period, with each chapter being the same day (July 15th) of a different year. So you see these characters grow up, and you follow them over the highs and lows of life. It’s a mostly successful formula that’s handled far better than the last book I read built on a similar format.

The bones of this story are solid, and familiar. Nothing particularly amazing or noteworthy, really. The man is an irredeemable cad who’s really only loved by the female, who herself seems pretty awesome even though the rest of the world hasn’t seemed to figure that out. Most of the book ends up being about the man earning her love, while she devotedly pines for him.

Don’t get me wrong, I enjoyed the book – for the most part. I just don’t understand why I have to keep reading this story. I mean, I’m a sucker for unrequited love – but why does the man always have to earn the woman’s love? Hell, why does either character have to learn to be a halfway decent person? Why can’t two characters fall for one another, and deserve one another, but just be kept from one another’s arms by circumstance? Maybe their timing is off, and one of them is always dating someone else. Maybe neither is brave enough to make that initial leap, with both of them always hoping the other will make the first move. I find those situations far more believable than some meet cute between a rogue and a future spinster.

I mean, this is a perfectly workable book. It was enjoyable, for what it was, and hit all the points it is supposed to. It generally left me with a feeling of contentedness.

Only….it had a little How I Met Your Mother feel to it. There was a build up with a lukewarm payoff.

Which is….just fine, I guess. But, ask me in a week and I won’t be able to tell you what these character’s names are.