The votes have been counted and Khaled Khalifa’s In Praise of Hatred will be our September #CannonBookClub read! 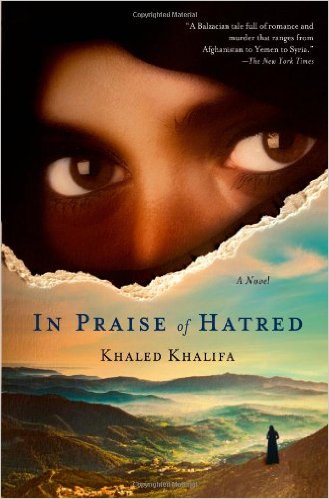 Our goal is always to expand our reading, so if this wasn’t your first choice, I as always hope you’ll make room in the next several weeks for both. #CannonBookClub convenes on Wednesday, September 13. I’ll be posting a Discussion Topics post two weeks before our discussion. As in previous Book Clubs, feel free to visit us here on the group blog for the dedicated post or in our Facebook Cannonball Read Book Chat group where I’ll have even more topics to discuss.

For a little more about our choice: In Praise of Hatred, first published in 2006 and shortlisted for the International Prize for Arabic Fiction in 2008 (by which time it had been banned in Syria and republished in Lebanon), is set three decades ago, when President Bashar al-Assad’s father was battling earlier opponents. A young Muslim girl lives a secluded life behind the veil in the vast and perfumed house of her grandparents. Her three aunts—the pious Maryam, the liberal Safaa, and the free-spirited Marwa—raise her with the aid of their ever-devoted blind servant. Soon the high walls of the family home are no longer able to protect the girl from the social and political chaos outside. Witnessing the ruling dictatorship’s bloody campaign against the Muslim Brotherhood, she is filled with hatred for the regime and becomes increasingly radical. In the footsteps of her beloved uncle, Bakr, she launches herself into a fight for her religion, her country, and ultimately, for her own future.

I look forward to discussing this book with you soon!