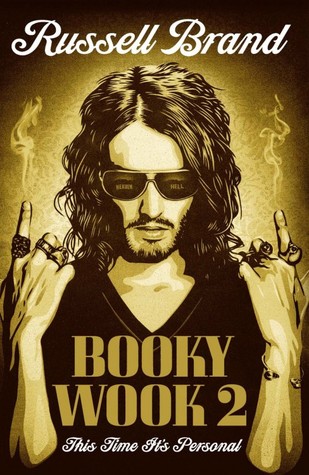 So I didn’t really like Booky Wook. I didn’t like it because Russell Brand’s stories mostly revolve around being drunk and/or high and they got dull after a while. But when I purchase a copy of the first booked, I purchased a copy of its sequel as well. I am nothing if not obsessive about completing things. So I read Booky Wook Two….and didn’t really like it. I did however discover that a lack of drug and alcohol fueled stories does not improve Brand’s writing. He’s sober most of this book and it’s just as uninteresting as the first one.

“Booky wook one had the huge advantage of being the tale of a man with a troubled childhood behaving badly as a result of crack and heroin addiction, this book differs because the drugs and childhood are gone but the madness remains.”

The majority of this book deals with Brand’s breaking out as a celebrity in Britain. And I might be the problem there. I do not know anything about British TV, especially British reality TV, which is where he started. I don’t know these comedians he’s talking about, I don’t know the commenters and I don’t know the reality TV stars. When he made it to Hollywood to participate in Forgetting Sarah Marshall, my interest was piqued because I do love me some Jason Segel and Kristen Bell. But most of the stories are still so self-indulgent that I was having trouble reading for all that my eyes were rolling. I don’t think Brand is a bad guy. I think he’s pretty entertaining on TV. But his energy just does not translate well to the written form.