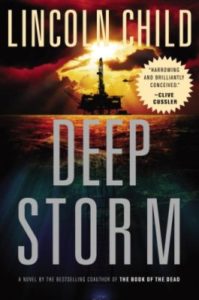 I have a weird fascination with locked in characters facing unimaginable horrors. This is probably why I love zombie movies so much. The battle of Helms Deep in Lord of the Rings: The Two Towers is my favorite part of the whole trilogy. You put a bunch of people in a structure planted firmly in the sediment at the bottom of the ocean? Yeah, I’m on board. Sphere was always my favorite Michael Crichton book for this reason, probably.

Deep Storm is just such a story (though, more Sphere than The Two Towers).

Deep beneath the ocean in the north Atlantic, an oil rig encounters some weird electromagnetic signals in the Mohorovičić discontinuity (Moho). 20 months later, Dr. Peter Crane takes a job on the aforementioned oil rig, which has seen a mysterious illness break out. When he arrives, he finds out that his job is actually thousands of feet beneath the rig, where a secret facility has been installed on the ocean floor. What unfolds is almost entirely dependent on not knowing too much about what’s happening, so I won’t spoil too much, but it’s a pretty engaging read if not a particularly deep or shocking story. This would make for a solid B-movie. The kind of rousing adventure that would be enjoyed, but not be seen as a classic.

While reading this, I couldn’t help but think Lincoln Child could best be described as Michael Crichton without the axe to grind. I’ve never read any of the Preston-Child books (not counting Relic, which I read in middle school and barely remember), but he apparently has made a career off of writing heavily researched techno-thrillers.

How you feel about this book can probably be predicted by how you feel about Michael Crichton. They aren’t particularly challenging, and aren’t re-writing the genre, but they’re fun books that have built a comfortable home for themselves on the line between adventure and science fiction.

I give this book 4 stars, but with a caveat. My last two reviews were both given 4 stars, and both were, I think, demonstrably better books than this. But I enjoyed this book a lot (even though, six months from now, I probably won’t be able to tell you anything about it except that it is set on the ocean floor).

Deep Storm was reviewed for CBR4 by TylerDFC. It was given 3 stars.