One of my top five! And it’s only January!

This book is soooooo good, you guys. It’s eye opening and tragic and heartwarming and epic and so many other things.

Yaa Gyasi (last name sounds like “Jesse”) is a Stanford graduate, born in Ghana and raised in America. On a visit to Ghana, while researching her book, she saw the Cape Coast Castle. This is one of many forts in Africa used by European traders. It is also the genesis of Gyasi’s fictional story, which begins in the late 18th century with two half sisters. Effia’s fate leads her to the upper parts of the castle, where traders live and keep their African wives. Essie’s fate leads her to the dungeons below, where slaves are held before leaving Africa on ships to the Americas. 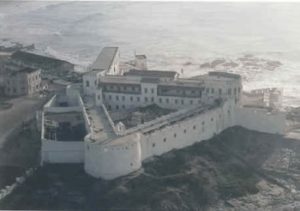 Gyasi alternates her chapters between the two family lines, advancing generation by generation, until she’s covered 8 generations, two continents, and over 200 years. She takes us to villages in Ghana, where a woman’s “first blood” dictates when and where she will spend the rest of her life; to the plantations of the American south, where families are split up and sold for labor; to Harlem, New York, where racial tensions permeate daily life. Despite the heavy subject matter, there’s something easy about Gyasi’s writing that makes the reading palatable and exciting.

Homegoing not only examines slavery and racial identity (both in Ghana and America), it also explores family, intuition, religion, and fate. I loved hearing about the Ghanian views of life events in terms of spirituality, how Gyasi describes a churning body of water as having demons in the depths, waiting to call people to them. Do people drown, or are they summoned by those other worldly entities? Are seemingly random thoughts the result of an arbitrary synapse firing, or is there a more deep seated reason that surpasses space and time that causes us to think about something? A shadow of our past, or even our ancestral past, perhaps? Is a dream just a dream? Or is it our forefathers calling to us, warning us, wishing us home? Do we have full control over our own fate? How much of what we are is the result of pure luck?

One other note, I “read” the audiobook and the narrator, Dominic Hoffman, was wonderful. He could sound African, southern, Californian, male, or female. Although I had trouble understanding a lot of the names (and this might be a book you’ll want to flip back and forth with the names and places and times), I really felt the audiobook format enhanced the story.

As this is Gyasi’s first novel, I look forward to what she writes next. Highly recommend.

Check out the blist for more reviews by genericwhitegirl