> FAQ Home
> Genre: Fiction > “Plots set in the future are about what people fear in the present.” 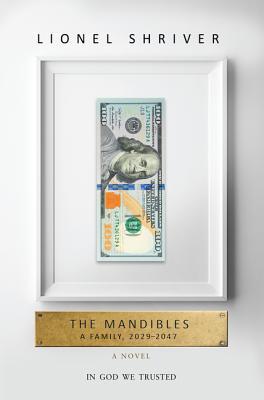 I kept thinking while listening to this audiobook: “This is what Orson Scott Card would write if he decided to tackle economics instead of world politics”. It’s a lot of talking, a lot of smart people arguing, and way more interesting that you’d expect. Lionel Shriver (who is apparently a woman?) also wrote We Need to Talk About Kevin, which is next on my TBR.

“Of course for professional traders on the stock exchange, money had always been imaginary – just as notional, just as easy come and easy go, as the points in a video game. Wage earners like Willing’s mother thought money was real. Because the work was real, and the time was real, it seemed inconceivable that what the work and the time had converted into would be gossamer.”

The Mandibles begins in 2029, as most of the world’s governments decide to switch their currency to the bancor, which would greatly devalue the American dollar (already not doing too hot). The United States rejects this proposal, and in an act that will create decades of fall out, decides to no longer honor any of their foreign debt. It also “resets” on all government bonds, prevents more than $100 from being taken out of the country, and requires all citizens to turn in every ounce of their gold to the government. The rest of the world, of course, reacts by declining to trade with or assist the U.S. in any way, and we watch as things go downhill from there.

Specifically, we follow the Mandible family: patriarch Douglas and his Alzheimer’s-ridden second wife; his son and daughter-in-law; their two children and four grandchildren; and Douglas’s daughter, Nollie. The effects of the bancor (or the rejection there-of) quickly destroys the Mandible family fortune, and Shriver takes us along for two decades of what happens next.

There’s a lot of economic in this book, a course that I dropped out of twice in community college (don’t ask me why I even bothered to enroll the second time), and I found it all fascinating. The characters are incredibly well-developed, and I got pretty attached to a couple of them over the course of the novel. It takes a while to get going, and to really get a grasp on everyone’s roles, but I got hooked pretty quickly. Shriver makes some entertaining jabs at the current United States (imagine if she’d written this now, instead of merely a year ago?), all the while maintaining a very complicated world of the future. It’s darkly humorous, and pretty scary at times.