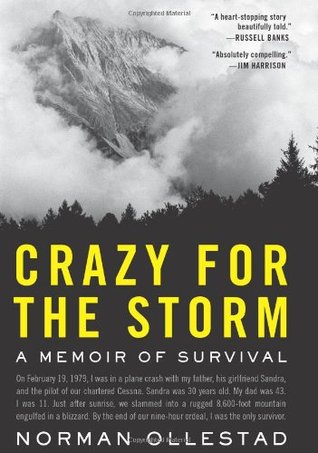 Norman Ollestad lost his father, stepmother, and almost his own life at age 11 when their Cessna crashed in the mountains. In this memoir, he discusses so much more than the crash — mostly the strong and terrible passions of his father.

“There is more to life than just surviving it. Inside each turbulence there is a calm—a sliver of light buried in the darkness.”

Ollestad’s father, a passionate surfer and skier, failed to fulfill his personal dreams of becoming famous (although he did some acting as a child). So, like so many before him and since, he thrust those dreams onto his child. Norman began skiing competitively at age 3, surfed (often against his will) whenever his father demanded, and learned not to complain about being tired or hurt or scared. The day that the plane crashed, they were returning to Canada to pick up a medal for skiing (won the day before), after flying home for less than a day so that Norman could compete in a hockey game.

The plane crash, of course, makes for impressive storytelling. But Norman interweaves his descent down the mountain and eventual rescue with far more harrowing tales: near-drownings while surfing, forced entries into skiing competitions, and a bizarre trip to Mexico during which he and his father almost get killed. It is far more the story of an aggressive and hard-nosed father raising a son to be a champion — at any cost.