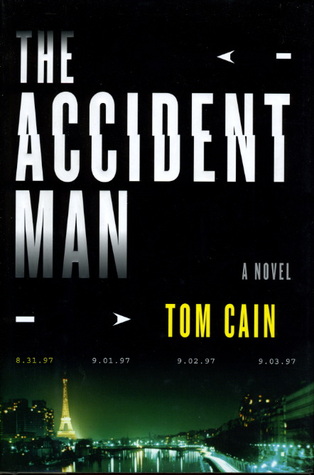 I really didn’t expect to like this one as much as I did. It seemed like another spy/assassin thriller, and after finishing Scratch One, I had low hopes. Instead, I found The Accident Man a fast-paced thriller with quite a few unexpected twists.

Samuel Carver escaped a crappy childhood by becoming a British SBS Marine. After he ended his tours, he somehow stumbled into becoming an “accident man” — arranging for the deaths of certain people on the behalf of a shady organization. In August 1997, he gets an order to cause an accident in the Pont de l’Alma road tunnel in Paris — an accident that ends up killing Princess Diana in this alternate timeline. After the wreck, he finds himself the target of a Russian hitman , hellbent on wiping out all witnesses to the crime. He teams up with another Russian assassin — a woman named Alix — as they work together to find out who has put a hit out on them.

This one has a lot of twists and turns, and while I saw some coming, most really surprised me. Tom Cain has no compunction about killing just about any one of his characters. The pacing of the book keeps the plot moving, and while there’s the expected interlude between the two assassins, it’s mostly moving from one plot point to the next as they try to discover who’s behind the whole conspiracy. It ends on a definite cliff hanger, and I was happy to find the next novel in the series at Half Price Books a couple days after I finished it!