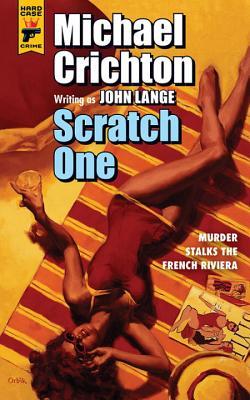 I was so sad when Michael Crichton died. I loved his novels, even the ones that weren’t so great (ahem…Timeline) and of course, he’s responsible for two of my favorite things to ever hit the screen: ER and Twister. So I was delighted to discover that he had a writing career prior to becoming Michael Crichton, under the pen-name John Lange. Unfortunately, the first (and probably only) book I’ve read of the 8 written under the Lange name kind of…sucked.

Scratch One begins with a series of assassinations across Europe as a terrorist group takes out targets in order to stop an arms shipment from reaching the Middle East. In response, the United States sends an assassin to take out the assassins. Unfortunately, he gets delayed. Meanwhile, bumbling idiot lawyer Roger Carr flies into France and gets mistaken for the American assassin, by both the “good guys” and the “bad guys”. What follows is basically Carr stumbling from one mistake to another, all the while managing to bed various women across the continent.

It’s really not very good, not to mention super sexist. Some of it may have flown more when it was originally written (1967), but to a modern day reader it leaves a bad taste — in addition to just being bad.