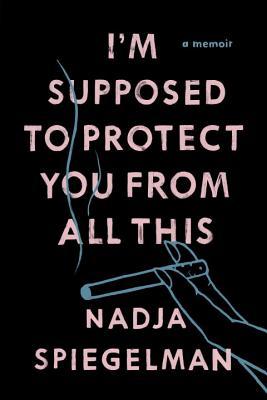 Nadja Spiegelman, daughter of Maus creator Art Spiegelman and New Yorker art director Françoise Mouly, wrote this memoir that’s less about her own life, and more about how her life weaves into her mother’s and grandmother’s and great-grandmother’s — and how secret and lies and tricks of memory can affect these relationships.

“I saw a pattern forming, like a series of skipping stones that sent ripples through the generations: all the granddaughters and grandmothers who loved each other, all the mothers left stranded in between.”

Nadja’s family likes to talk and tell stories, but those stories always seem to hide the real truth. When writing this book, she confronted her mother and grandmother about their pasts, and their relationship with each other, as well as Najda’s great-grandmother. A pretty distinct pattern appears — like Nadja, each woman fought terribly with her mother and embraced her grandmother wholly. Nadja tries to find some deep truth or overall meaning to this pattern throughout the course of the memoir.

Some of the stories are interesting, but I feel it was probably a lot more interesting to the women involved her than to an outside observer. There’s also a pretty strong recurrent theme of sexual abuse — Nadja’s grandfather was not a good guy, and his family knew it — that got pushed under the rug for years by various family members. Nadja reveals it, but doesn’t really pursue and the whole thing made me really uncomfortable. In the end, it’s a decent read but not quite what I expected based on the summary or the reviews I read.