> FAQ Home
> Genre: Biography/Memoir > This one starts decently but then…it gets worse 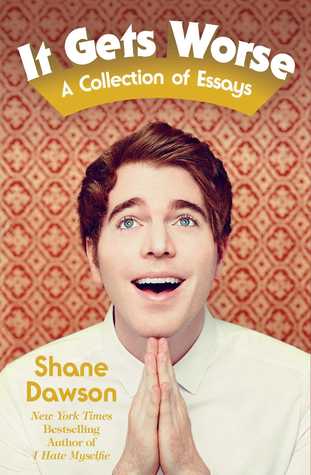 You can usually tell when an author has a small but rabid following, when Goodreads has their rating insanely high (4.51 in this case — Harry Potter and the Sorcerer’s Stone has a 4.42) but less than one hundred reviews. That should have been a big clue to me, in addition to the fact that I have never heard of YouTube star Shane Dawson (I promise I’m not super old — just kind of old). But whatever — Overdrive recommended it, and at least it was short?

“I’m here to tell you that it gets worse. It really does. The problems you have as a kid will seem ridiculous when you get older because bigger and worse problems will come along. But you will learn to deal with them easier as you grow up, or, like me, you’ll just stop giving a shit. So yes, it gets worse, but you know what gets better? Your tolerance for the bullshit.”

Shane Dawson, as I found out, apparently is pretty famous on YouTube, particularly among twelve year old girls (or so he kept saying — I’m still not 100% certain what he…does). He spends most of the first part of the book talking about how awful his childhood was — he was fat, bullied and unsure about his sexuality in a time/place when that was REALLY not okay with people. The portrait he paints does not match up with the cutie pie boy band-looking guy on the cover of the book. But some of the stories, particularly when he talks about his passion for acting, and his relationship with his mom, were pretty good. Then he gets into his adult life — his struggle with bulimia, his coming-to-terms with his bisexuality, and his semi-fame as a YouTube star. The subjects aren’t bad at all — it’s the writing. He runs around from topic to topic, he pokes fun at himself in ways that aren’t funny, and he makes a 250 page ebook seem A LOT longer. Maybe I need more context to enjoy his humor, or maybe I need to rewind 18 years — either way, Overdrive’s hit or miss recommendation system definitely missed me on this one.