> FAQ Home
> Genre: Fiction > Do you prefer your coffee with some Angst? 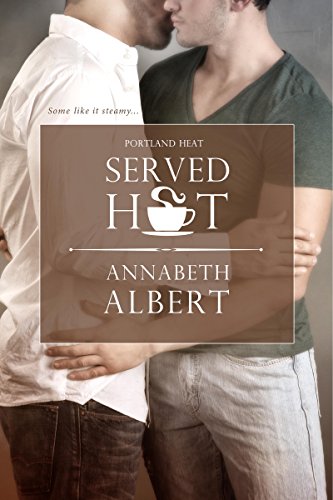 This is my second Annabeth Albert novella.  I really liked it, although not nearly as much as the first.  She packs a LOT of angst into this one.  Angst is not my preferred flavor, but I still enjoyed it, and read it very fast.  Like the other novella, the set up for the story is very straightforward, and both characters likeable.

Robby is a Portland hipster who owns his own coffee cart.  He has a crush on David, a daily regular customer.  They dance around each other and are both very hesitant to move towards a relationship.  The whole story is told from Robby’s point of view.  There is very little action or outside events in this book.  Just two people getting to know each other and getting comfortable with themselves and in a relationship.

I am just feeling novellas right now.  They give me just the right amount of story in the right sized package (heh.)  Novellas tend to be lighter in tone too, but this one touches on a bunch of tough emotions for the guys.  David has a crazy history.  I don’t want to share it here, since David’s opening up to Robby is at the heart of the story.  Robby has some past relationship issues and a real problem with communicating his needs and hopes.  It was a lot heavier than I expected, but the author did a great job of making me care about these characters very quickly.

I got this one in a bundle as a three novella series.  I am going to hold off on the other two until I finish some other books.  But I’m only doing that to savor them and give myself a reward for wrapping some other things on my TBR list.