Registration Is Open! Sign Up Today
> FAQ Home
> Genre: Fiction > “What would that be like? To wake up one morning and be normal?” 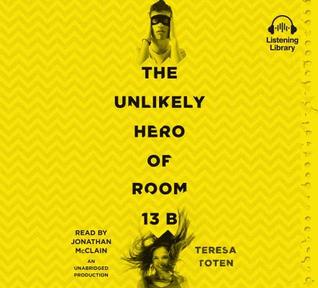 This book tackles some serious mental health issues, and does so with an interesting cast of characters. Still, I found it a bit lacking plot-wise, with much more emphasis on the teenagers-in-love than I really needed.

“I believe that I am unclean and will harm those I care about the most and that there is too much noise in my head and that I am so goddamned tired.”

Adam attends group therapy in Room 13B, along with several other teenagers suffering with OCD. Their therapist suggests that they each select a new name — a new identity — to help with their struggle. They all choose superheroes — Adam goes with Batman, and immediately falls for the (female) Robin in his class. Unfortunately, despite his new-found obsession with a girl, his old obsessions and compulsions remain stronger than ever. And his mother, hardly the picture of mental health, seems to be worsening in her own way.

It’s important that authors use YA to discuss mental health — this could be the only resource some teens have for dealing with their own problems, or a jumping off point for “real-life” intervention. And I get why a YA author might feel the need to throw some teenage romance in there to keep the audience interested. But I felt like Adam’s obsession with Robin and his desire to get better for her really detracted from the story. Also, Robin’s not terribly likable — she lies to him, she leans on him without letting him lean on her — which turned me off quite a bit. Adam’s problems with his mother (with whom we see how closely OCD and hoarding are linked) and his step-brother (a little boy with a serious anxiety problem) provided much more interesting reading, in my opinion.