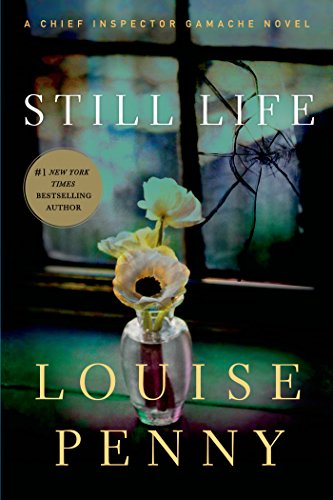 In the tiny town of Three Pines, the body of Jane Neal is discovered in the woods. Miss Jane was beloved by her neighbors, many of whom are her former students. It appears that her death was a hunting accident, but when Chief Inspector Armand Gamache is assigned to the case, he begins to think it may have been on purpose.

There are few things in life that are cozier than laying on the couch under a blanket, reading a British murder mystery. Still Life actually takes place in Quebec, but it hits all the British cozy notes. Eccentric, appealing townsfolk, vivid descriptions of the town, a brilliant though not infallible detective, and a tidy ending. Inspector Gamache is reminiscent of Poirot, I thought. The whole thing was sort of Christie-esque, only modern.

The mystery itself is interesting and engaging, but seems almost secondary to the focus on character development and the relationships between characters. I wouldn’t say it’s a tough mystery to solve, as it’s sort of telegraphed in the first few chapters just who the town weirdo is, but it was still enjoyable to try and figure out the motive. There’s also a red herring at the end that threw me off for a bit.

Inspector Gamache is a great character. Although he hits a lot of classic detective notes, I like that he’s this very kind, collaborative guy. He encourages the townspeople to try to solve the case, and really tries to integrate himself into town life. Still Life is the first in a series of mysteries starring Gamache, and I’ve heard good things about the rest of the series as well, so I’m looking forward to reading more about him. Apparently all the books take place in Three Pines, which surprised me. How many suspicious deaths can there be in a town of like 500 people? We’ll see if the rest of the series lives up to the promise of Still Life.