> FAQ Home
> Genre: Biography/Memoir > “Was it even fair to expect the person you’re with to be just as happy as you? Furthermore, how could you ever even know for sure?” 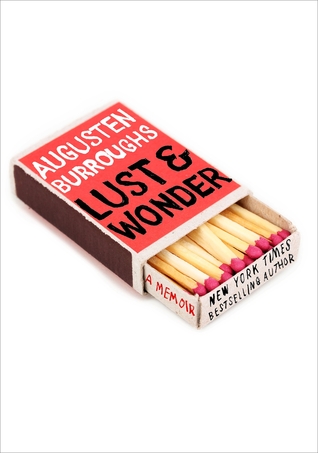 I read Augusten Burroughs’s memoir about his extremely messed up childhood, Running With Scissors, sometime when it first came out in 2002. Since then, I’ve read many, many memoirs about messed up childhoods, but for some reason, his really stuck with me. I’ve read most of what he’s written since — Dry, Magical Thinking, Side Effects, and now, Lust & Wonder. None of them have really measured up to Running With Scissors for me, but Lust & Wonder comes the closest.

Lust & Wonder recounts the years following Burroughs’s time getting sober (covered in Dry). It’s broken into three sections, and each covers a different relationship. He also discusses his writing and his own mental health (in detail). His obsession with things — particularly bright and shiny things — gets broken down here. He also talks about a relationship with a man with eventually died of AIDs — a relationship that affects every person he loves from that point forward.

The first two sections are tough — both relationships are unhealthy and unhappy, in different ways. But you can tell that something good is coming, and when it does arrive, it makes all the heartbreak worth it. If you like Burroughs’s writing, then you definitely need to read this one.