> FAQ Home
> Genre: Fiction > I liked the bits with the horses 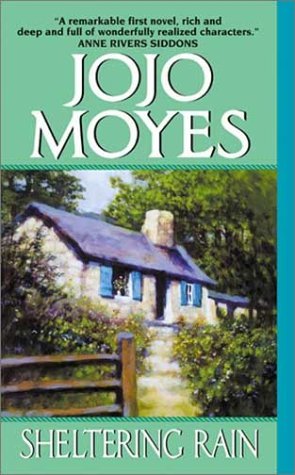 Sheltering Rain begins in the 1950s in Hong Kong, when Joy meets her future husband, Edward, during the coronation of Queen Elizabeth II. They eventually marry and produce two children — Christopher and Kate. In the late 1990s, Joy and Edward live in a falling-down estate in Ireland. Kate — now in her mid-thirties and splitting with her live-in boyfriend — sends her sixteen year old daughter, Sabine, from London to Ireland to spend time with her grandmother and ailing grandfather, despite the fact that Kate has been estranged from her parents for years. Sabine starts out a little bitch, but eventually comes to love spending time with her grandparents on their Irish estate, especially riding the little horse her grandmother borrowed for her. In typical Moyes fashion, the women all come together to unearth old family secrets and mend their broken ties and hug it out in the end.

I wonder if Sheltering Rain, Moyes’s debut novel, somehow inspired Ship of Brides, since Joy makes a similar journey in the novel (although it only takes up a few pages of the overall story). If so, I would love it if she would expand another small section of the novel — the life and experiences of those Europeans stationed in Hong Kong during the Korean war. It was one of the most fascinating parts of the novel, however brief. You can have that suggestion free of charge, Jojo.