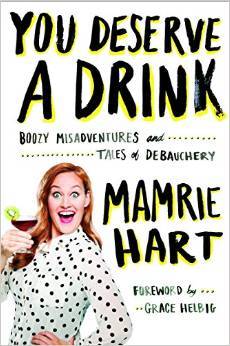 Thank you, Goodreads. I never would have heard about this book without your recommendation, and I likely never would have read it without winning it through one of your giveaways. So Goodreads is totally responsible for all the snorting laughter that resulted from my reading this book.

“Friends should be like a good bra, lifting you up. Bad friends are like sports bras. They can do wonders when you go out dancing or during high-energy times, but one a day-to-day basis they really just smush down some of your greatest assets.”

Mamrie Hart apparently has a YouTube show where she creates drink recipes to go along with various pop culture events. She’s also done some live comedy shows and a little acting. I had never heard of her before — I’m still not entirely certain how to pronounce her first name, in fact — but I must say this was the best round up of “drunk girl doing stupid things” stories that I’ve read in a while. It reminded me of the better Laurie Notaro books — with less complaining about her weight. Mamrie describes various parties she’s attended, bad roommates and vacations, family adventures, and so on. Every chapter begins with a cocktail recipe — most of which sounded pretty gross, tbh, because I am not about putting jalapenos in my booze — and she throws in occasional drinking game suggestions. She also speaks very openly about her anxiety attacks (she also reminds me of Jenny Lawson — a high compliment, Miss Hart) and about some really dumb mistakes she’s made. I did not expect to enjoy this book this much, but it really cracked me up.