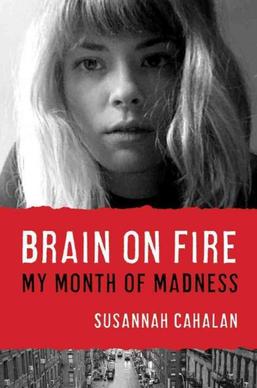 It took me a while to really get into Susannah Cahalan’s autobiography, Brain on Fire, simply because I was listening to it as an audiobook when I started The Martian, also on audiobook. And while Cahalan’s mystery disease certainly fascinated me, it’s hard to compete with an astronaut stuck on Mars — even if he’s fictional. But once I devoted my full attention to her medical woes, she hooked me.

“We are, in the end, a sum of our parts, and when the body fails, all the virtues we hold dear go with it.”

It started with a bedbug scare, some forgetfulness, a paranoid feeling. Cahalan, a writer in her 20s who worked at the Post, experienced some rather random symptoms over a month-long or so period that everyone blamed on either stress or drinking. Once those symptoms turned into full-blown psychosis and seizures, her parents got her into the epilepsy floor at NYU. There she spent a frightening month, as doctor after doctor tried and failed to diagnose her, while she lost more and more of herself to her disease. Finally, when she was close to being committed full-time to either a psych ward or nursing home, a real-life Dr. House discovered the problem — her brain was (figuratively) on fire.

Years after this scary time, Cahalan is mostly back to normal. She spent months trying to piece together what happened to her, as she barely remembers most of it. The book is written wonderfully — a good balance of clear medical details and her own frightening emotions. I also liked how she ended the book with a discussion about others affected by her disease — and how many remain undiagnosed.