Calling all Cannonballers! Submit Your Best/Worst of CBR14 by Saturday December 10!
> FAQ Home
> Genre: Audiobooks > You guys, this book was a such thrill-ride 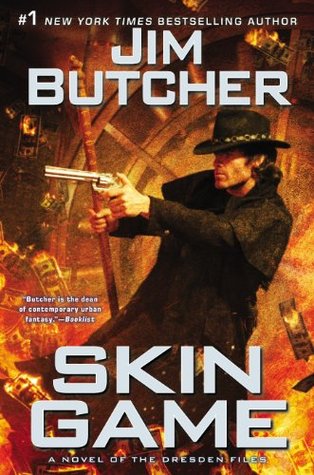 I snooze, I lose. I was hoping to be the first one to publish a review of Skin Game, but Emmalita/Rochelle beat me to it.

Standard spoiler warning! This is book 15 in the series. You don’t want to start here. If you’re not caught up with the series, you may want to skip this review, because while I’m going to try to not spoil this actual book, I can’t actually avoid spoilers for some of the previous ones. It took me a long time to get hooked on these books, but they are totally worth the effort. Just skip the first three and start directly with book 4, Summer Knight. You’ll thank me, because the first three are a slog to get through.

Are you still here? Spoilers be on your own head then.
Harry has been stuck on Demonreach, his island/supernatural prison for the past year. He’s kept busy doing parkour in the tunnels underground, needing the sentient spirit who lives there to help him keeping his headaches from crippling him. Mab shows up and claims he will be dead in three days if he doesn’t do her bidding. The parasite inside his head will burst through his skull, take shape and go after everyone he holds dear. That Mab, she’s such a motivator.

Seems the Queen of Air and Darkness has loaned out her Winter Knight to pay back a debt. Harry has to help none other than Nicodemus Archleone, head of the Order of the Blackened Denarius, pull off a near-impossible heist. If he agrees, he’s pretty sure that Nicodemus will try to kill him during the mission. If he doesn’t agree, Mab will let him die, and appoint a new Knight in his place. He doesn’t have much of a choice. Now he has to work with some of the slipperiest characters of the supernatural underworld (most of whom would happily kill him as soon as they got the chance) to break into the treasure vault of Hades himself. What could possibly go wrong?