> FAQ Home
> Genre: Fantasy > Is the Past Written in Sand or Stone? 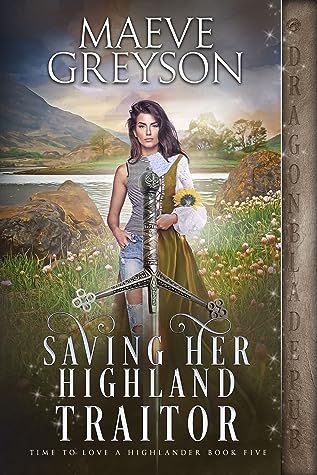 After Mira and her godson Robbie travel back in time to 18th century Scotland, they settle into a content life with Clan MacDonald. But when Mira realizes that the chief, Teague, is destined to be executed before the end of the year, she becomes determined to avert his fate.

Time travel historical romance is a niche genre that I’ve had very little exposure to. I enjoy straightforward historical romance, but the fish-out-of-water aspect of it, as well as the ever present feeling that it would be incredibly uncomfortable to have to use a castle latrine, has typically turned me away from this subgenre. However, I liked the idea of the time traveler trying to change history, so I decided to pick up this book.

This is the fifth book in this series, but as the books are standalones linked by concept, I found that I could plunge in without any background required. Mila is a tour guide who is often assisted by her clever teenage godson Robbie, who she adopted after the death of her parents. I liked their characters and the bond between them, as well as the complications added by having two people fall back in time together.

I also enjoyed the mystery aspect to the story as Mila rushes to save Teague, who she knows from work is due to be executed by the end of the year as a Jacobite. Though she is able to convince him to give up his treasonous activities, there is a traitor in their midst who seems to want to see Teague dead. I was genuinely surprised by the reveal of this person’s identity, and enjoyed how the author played with the trope of the other woman to achieve this. The ending of this book was more bittersweet than you see in most modern romances, which I also appreciated.

However, I felt that the character of Teague was not as well-defined as that of Mila and Robbie’s – he seemed to be present more as an idealistic romance hero than a complicated, realistic person. While I didn’t dislike him, I didn’t particularly get attached to him. I also thought the romance between Teague and Mila was rather weak, as I didn’t really understand what drew the pair of them together.