Open Registration ends 2/10/23 - Sign up for Cannonball Read 15 today!
> FAQ Home
> Genre: Comedy/Humor > “I didn’t smuggle the dog into the country; I merely caused him to be smuggled out of Baluchistan.” 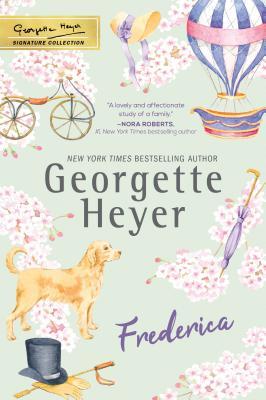 The Marquis of Alverstoke, wealthy, vain, and immensely bored, sees no reason why he must put himself to any trouble for anyone at all. But when he agrees to sponsor a beautiful young woman’s debut in society, he can’t help but become tangled up with her managing older sister.

I read Georgette Heyer’s romances sparingly. Not because I dislike them, but indeed the opposite – I adore their sharp humor, hijinks, and immersive historical setting – and I don’t want to gorge myself on them. And all of these are shown off to perfect effect in Frederica.

There’s lots of laugh out loud moments courtesy of the impossible travails of Felix, Jessamy, and the rest of the Merrivale family, but also plenty of tongue-in-cheek humor poking fun at interpersonal relationships, gender roles, and the social mores at the time. The incident of Lufra the dog and his supposedly noble ancestry cracked me up, and I will never think of restorative pork jelly in the same way again (though admittedly I never did think of it before).

But beyond that, it is also the enjoyable story of a jaded man coming to care about other people at long last. Though Frederica is the titular character, it is Alverstoke who is the protagonist, and who astonishingly and rather reluctantly comes to be interested in other people, to truly love someone who is not himself. To this end, I really loved that the book follows not only his relationship with Frederica but also the way in which he bonds with Felix and Jessamy, leading to some of the more emotional parts of the story.