> FAQ Home
> Genre: Romance > will continue to read McFarlane but this wasn’t my favorite 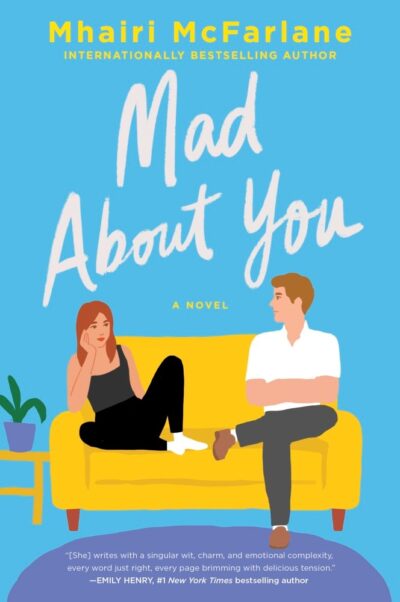 As always, McFarlane writes books that seem like they’ll be lighthearted romances. They even have the quintessential Eric-Carle-block-print-esque covers and bright primary colors that denote Romance Genre books vs romance novels (a super reductive frankly sexist delineation that I think was promulgated to help people feel “better” that what they’re reading isn’t “just” romance). But like all McFarlane books, the romance is almost secondary to a larger emotional conflict that’s been weighing on our main characters.

Some thought and recollections later, though, I’m not so convinced that McFarlane hits the same highs as in her other novels. The emotional conflict at the heart of the novel is meant to be a weighty one (closer to Just Last Night than say If I Never Met You) but is a bit thin–easy to see from a mile away and a bit facile in its resolution. And even, dare I say it, a bit out of fashion(?) insofar as emotional conflicts are concerned? Or maybe late to the party.

Given that there’s a content warning on this book, it’s not much of a surprise to say that the Emotional Heft of this book is carried by Harriet’s former relationship, with a gaslighting emotionally abusive boyfriend. The issue is that he’s a cartoonishly evil type of guy, the sort that would be played by someone straight out of central casting. Some of the more interesting bits come from Harriet’s relationships with her friends, who are supportive but deeply suspicious of her attempts at protecting her abusive ex from his latest girlfriend–is Harriet really being a Good Samaritan, or does she have unresolved feelings for him? In some sense they went through the wringer with her, and they’re only human.

There’s some additional subplots around her friends and her former boyfriend, but they lack the 3D vitality that normally infuses McFarlane’s secondary characters. In Just Last Night Ed might be sort of a bad guy (he’s the one the main character has been in love with for ages, and maybe knows it and plays on it a bit?) but you can at least see why Sophie (the main character) might have been with him. By the time we get some nuance in those plotlines, we’ve already had a Dramatic Dénouement or two and the whole thing is feeling a bit…cookie cutter.