> FAQ Home
> Genre: Fiction > “Why should those of whom one is fondest have to suffer the most, and why is it that one can never do anything for them?” 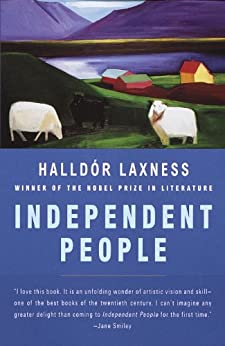 Bjartur of Summerhouses is obsessed with being independent. A sheep farmer in early 20th century Iceland, he lives a life of hardship and deprivation, dogged by the spectres of legends, encumbered by his family, which he forces into his lifestyle as well, only uplifted by the poetry he creates, and the feeling of not owing anything to anyone.

Independence is the most important thing of all in life. I say for my part that a man lives in vain, until he is independent. People who aren’t independent aren’t people. A man who isn’t his own master is as bad as a man without a dog.”

Independence, however, comes at a high price, especially for those that depend on Bjartur, like his wife and children. It is a gruelling tale that demands persistence from the reader, but it is worth it. Although Bjartur’s is the story of a single peasant who almost never leaves his small plot of land, it illustrates the story of the whole country: the past and the myths that shaped it, the modernisation that threatens the old ways, and the people that are forced to change with the times.

What makes the book enjoyable despite the heavy subject matter is Laxness’s writing. Not only is it dazzling in the descriptions of the characters, the landscape, and the legends of old, but he makes even the most terrible of situations more bearable by using his own unique brand of humour. It is dry and absurd, and matches the land and the people perfectly. He shows his disdain for the upper classes, but for the poor people, the farmers and workers, he has great compassion, as flawed as they are. Even Bjartur, who seems almost villainous in his obstinacy and selfishness, is ultimately so complex that he cannot be easily despised.

Laxness never shrinks back from detailling the harsh and unforgiving reality peasants like Bjartur and his family have to face, a reality that makes them as tough and unbending as that they are. And while the characters live in the dirt and the cold, and endure sickness and heartbreak, and poverty despite never-ending hard work, their creator put them into a book that is also full of beauty.