Here go the hate reads! I needed to know if Don ever came to the patently obvious realization that he’s autistic, and if Rosie ever cuts herself free from that knot before he finds a way to hang her from it. Mostly, though, I just wanted to see if these books could possibly get worse still and the answer to that question is a resounding yes. And if you’re wondering if spoilers follow, the answer to that question is also yes. SPOILER WARNING!

First, there’s The Rosie Effect, AKA the book where Rosie gets pregnant, without consulting Don first (retribution for all the cases of him pulling the same crap), and Don against all odds remains out of jail. Towards the end of the book, Simsion teases Rosie packing up and heading home, leaving Don behind, and I was positively rooting for it. I thought surely he can’t reverse course with so few pages left. No such luck, though. How many outs does this man have to give you, Rosie? I was honestly perplexed when you stuck with him, let alone married him (in a flash, mind you), at the end of the first book, and I’ve seen nothing to tip the scales back in his favor. He went to a playground to watch children by himself and was arrested as a suspected pedophile. He had a friend pose as you when they had court-ordered therapy with his spouse. He moved pregnant you to a new apartment that smells of vomit-triggering beer and that has an upstairs neighbor who drums at all hours of the night when you were at work without telling you. He invited the friend you don’t approve of to live with you without consulting you first. He got your exit strategy, the plane home, turned around because his touch of the ’tism had them convinced he was a plane bomber. I mean, this entire book, Don was deserving of nothing aside from a healthy dose of this: 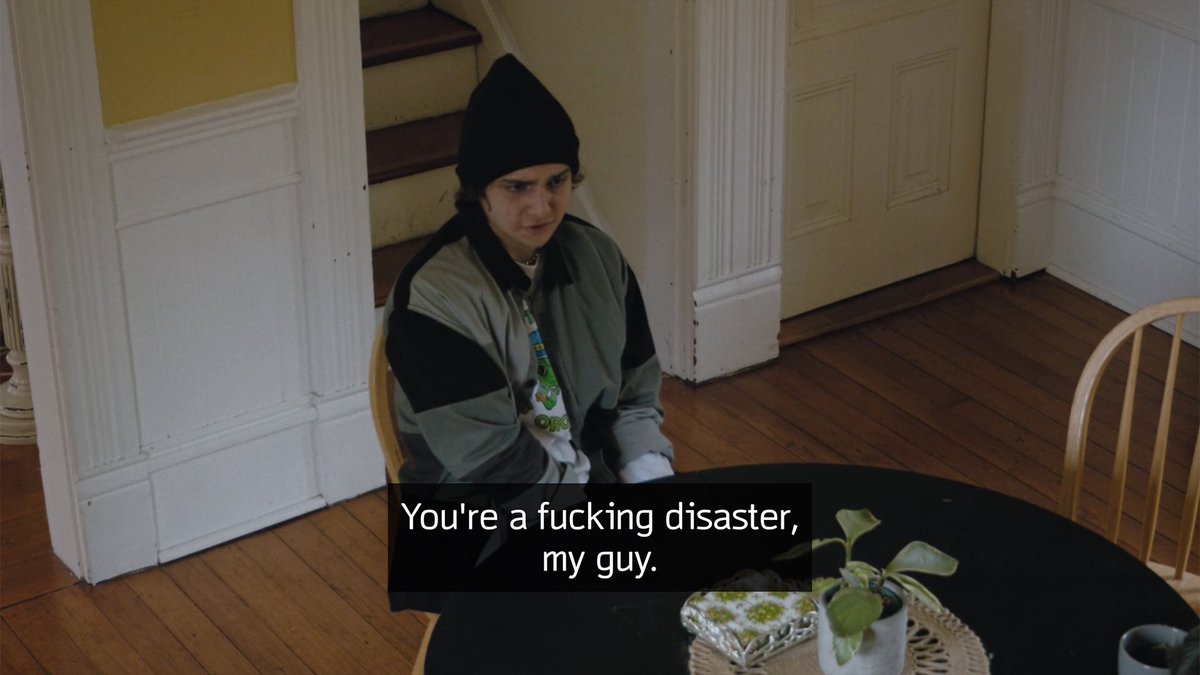 I’m still not altogether sure how he continues to fail upwards. Seriously, he’s always at risk of getting fired or jailed or what have you for his latest example of brazen stupidity that I’m assuming is meant to be funny in a sitcom-y way. Yet this man is allergic to actual failure. He keeps his hot wife, he hops from one prestigious job to another, and his problems seem to solve themselves. It’s absolutely maddening. Like I said in review of the first book, the Sheldon Cooper comparisons are spot on, because these books are sitcom logic through and through. Problems don’t last long in sitcom-land and neither do they here. Except, as in a sitcom, there are no shortage of issues, and that’s the only meat on the bones of these stories. Book two is just Rosie’s pregnancy if you strip away Don being a dumbass.

Then book three is just when Don’s lightbulb finally comes alight, realizing he is autistic… and that he gave his son that touch of the ’tism too. It begins with text that says “to the many people in the autism community who have inspired and supported these books” and I almost didn’t read past that point. Please, Simsion, direct me to these members of the autism community who support these books so I can pick their brains, because I really don’t get it. Prior to that note, and The Rosie Result, he’d written two books filled with stuff like Don calling kids with Asperger’s “victims,” a woman telling him “you’re not going to undo whatever trauma happened in your childhood… [a]nd … [d]on’t ever have children” (while his narration says things like “it was more interesting to listen than to argue”), Don’s drive in the first book to change himself to be less “weird” for Rosie, and the way he treats “autistic” as if it’s a scary word and one not worth even pursuing.

Speaking more on that last point, this final book is just that multiplied exponentially. For example, Don wavers on the idea of getting assessed for autism as a way of washing his hands of his latest dumb-Don moment, but doesn’t want to acquire another label and spends the whole book trying to diagnose himself (and his son) instead of just leaving it to the damned professionals. In the end, it’s online assessments for everybody. Don and his kid, Hudson, both seem dead-set against being formally assessed, but there’s no hesitancy from a scientist about accepting an informal online assessment. Look, I get formal assessments are out of reach for many people, and the autism community is relatively welcoming of self-diagnoses as a result, but none of those barriers to entry should exist for these characters. It seems, at best, silly to me that not even Don would seek out a professional because, as I said, he’s a scientist and thus should see the value in it. And the principal established the benefits of their son receiving a formal diagnosis; he may not want the aide, but that’s not the only assistance that can come with it. More than anything, though, it felt like a weird resolution after hundreds of pages of them debating whether they thought he was autistic or not, whether they should get him tested or not, etc. Is he, isn’t he? Should we, shouldn’t we? Oh, he is? And he figured it out himself on the computer? And told everybody we know? And his friend says did the same test and it said she’s autistic too? And this made his dad finally get the idea and he was like “so tell me about this online quiz thing”?

That’s all a big no for me, dog. It doesn’t help that there’s more weird autism-related rhetoric that gets thrown around without really being properly addressed. For instance, there’s a big fight about if ABA is the right choice for kids or not, but it remains between the two women at the event Don attends, Simsion never seeming to fall on one side or another. They both get ample time to air their thoughts and grievances, yet nothing about what goes down seems to indicate a preference for one side or the other. That’s par for the course in these books, as evidenced by that previous example of the woman going off on Don and him just letting her rant, not even offering side-comments via narration. It’s all very strange. I feel like Simsion was trying to be inclusive, to touch on all the different autism-related discussions, except he was content to just throw in people having them without contextualizing them in any way or trying to weigh in himself. It’s such a grab-bag of shit. Like of course their son’s friend has anti-vaxxer parents who inevitably make a comment about believing Hudson’s autism was caused by the vaccines, a remark that’s just left to flap in the wind like all the rest.

But I’m only ranting now, so I’ll leave it there. I don’t want to devote brain-space to thinking about these books any longer. Please don’t waste your time on them like I did.

P.S. Oh, and the adulterer friend Gene is dumped by Don after he finds out he tricked him into thinking he hadn’t actually slept with all those women just so Don could convince Gene’s son, in the hopes that he would hate him a little less, since he didn’t think he’d believe it coming from his dad. But, plot twist, Rosie comes around on him and tries to rekindle their friendship at the end of the last book. First of all, that was the last straw? Second of all, why, Rosie?