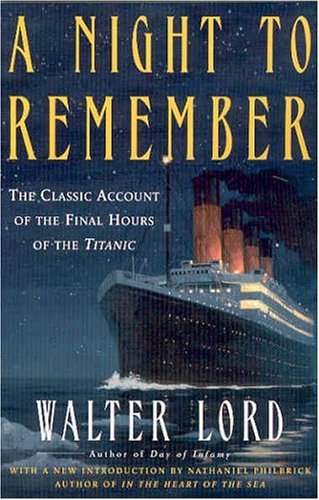 CBR 14 Bingo: Cold
It’s cold out on the water, cold enough for icebergs – which is half the trouble.

Lord recounts the last night of the Titanic, for the moment just before it hit the iceberg to how the rescued passengers were picked up by the Carpathia.

I know about as much about the sinking of the Titanic as I’ve gleaned from the movie, but it was fascinating to see myths set straight and learn more in this short book. Lord meticulously gathered firsthand accounts, so you get a real sense of what it was like to know, for most of those aboard, that you are likely going to die.

I also appreciated that Lord discussed the disparities between how the First Class passengers were treated when contrasted with Second Class and especially steerage. The lists of names at the end of the book, the count of the living and the dead, really drummed in how privilege influenced one’s chances of survival on that night.

I wish Lord had been able to collect more recollections of the survivors from Second Class and steerage though. A lot of attention is paid to how those in First Class behaved, their lives, how Titanic marked the end of the era of the aristocracy of the rich – but we learn very little about those who were traveling with less glamor and funds, beyond a handful of accounts. I wish I could have learned more about them, especially in light of the injustice that they suffered.